'Mike' is Magic and More 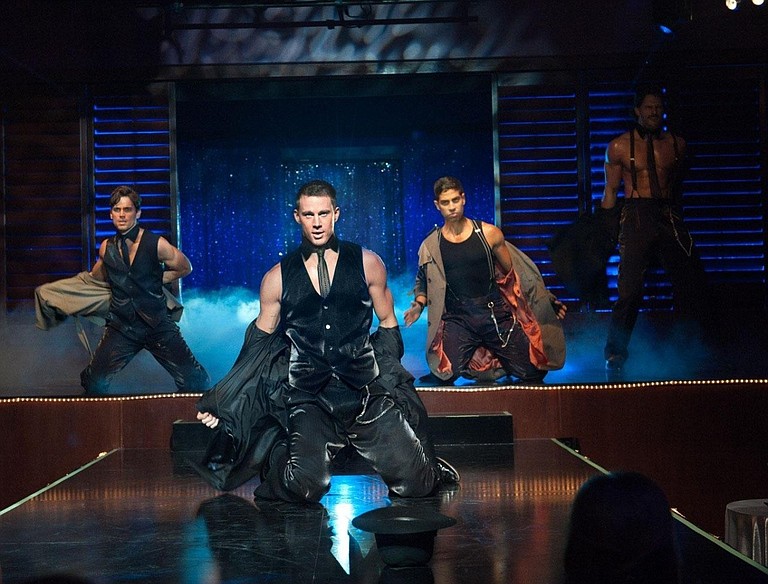 "Magic Mike," loosely based on star Channing Tatum's own past, is as raunchy as expected, but also surprisingly thought-provoking.

"Magic Mike" bares skin and exposes the finer aspects of southern gentility. The list of bona fide southern men involved in this film includes director, cinematographer and editor Steven Soderbergh ("sex, lies and videotape," "Erin Brockovich," "Traffic"), who hails from Baton Rouge and is a darling of film critics for his personal style of filmmaking. Then there is Channing Tatum ("Chan" to his fans), who lived on a bayou in Mississippi during his pre-teen years and on whom the story is loosely based, and Matthew McConaughey, a beef-fed lad born and raised in the Lone Star State. This southern triumvirate, along with a great supporting cast, creates a spectacular cabaret experience.

After my husband declined my invitation to view "Magic Mike" with flimsy excuses of work, a friend (whose name shall not be disclosed in the interest of complying with privacy laws) and I joined hundreds of other ladies of a similar age and matronly body type for a "girls just wanna have fun" afternoon at the movie theater. The film did not disappoint.

The movie opens on Dallas (McConaughey), the owner of Club Xquisite. He saunters on stage in his cowboy boots and skin hugging leather pants, which hang dangerously low to exposing his personal treasures. Pointing to an erogenous zone, Dallas says, "Fact is, the law says you cannot touch!" He pauses and smirks. "But I think I see a lotta lawbreakers up in this house tonight." The crowd goes wild.

Dallas and his club are emblems of decadence. The movie does not exploit decadence; rather it gives decadence its due.

The beginning of the film sizzles hot—like chili-pepper hot. Each shot screams of double entendre. The dance numbers, choreographed by Alison Faulk, flash bare sculpted booties. Everything seems to become sexualized. There is something base and fascinating about men willing to wear a thong and expose their cheeks for a dollar tip.

The floor show at Dallas' club acts as a prism through which we see the characters' lives. The formalized numbers center the movie, and the feature attraction is Magic Mike (Tatum). He is joined by: Ken (Matt Bomer of "White Collar"), who performs as Barbie's dreamsickle boyfriend; tough and tumble Tarzan (WWE star Kevin Nash); Latin loverboy Tito ("CSI: Miami" investigator Adam Rodriguez); Big Dick Richie (Joe Manganiello of "True Blood"); and Adam aka "the Kid" (Alex Pettyfer). They jump, turn, slither, hump and strip to high-octane music in various iterations of the all-American man, from gunslingers and cops to firefighters, soldiers and construction workers. The scene where Mike and the Kid perform their police routine for sorority girls that devolves into a fistfight with a frat boy will make you hoot with laughter, even if the whole scene seems so wrong.

Mike's myopic view of his world changes after he meets the Kid's older sister Brooke (Cody Horn). Mike's blown away by the fresh-faced and sharp-mouthed Brooke. Brooke tells Mike that she had hoped the stripper thing was all a joke. He replies: "It is pretty funny."

Under Soderbergh's direction, the movie doesn't stay at an incendiary level of shallow. It eventually teases and pulls out the three-dimensional world of exotic male dancing. The movie pops the air from any fairy-tale notion that being a well-sculpted male is easy. Sex, booze and fun every night of the week is not all it's cracked up to be when you're over 30 and a bank won't give you a loan because you haven't established any credit. Packing thousands of $1 bills may stroke the ego, but no one wants to marry that guy.

This film balances the G-string without toppling over into tasteless extremes more than a dozen times. I laughed. I laughed more, and I came to appreciate Tatum's dancing and acting talents. Unlike in his past work, Tatum comes alive in this film. But what I appreciated even more was Soderbergh's intelligent use of the material. When there is nothing to believe in but pleasure, hedonism has a ghastly desperate edge. "Magic Mike" is, in fact, a thought-provoking movie, and McConaughey's performance should earn him an Oscar nod if Puritanical forces do not bar him admittance.