Democratic members of the Mississippi Legislature are calling on fellow lawmakers to fully participate in the expansion of the state Medicaid program allowed under the recently upheld federal health-care reform law.

After last week's U.S. Supreme Court decision affirmed the constitutionality of Affordable Care Act, but told states they don't have to add more people to the Medicaid rolls, top Republican leaders signaled they might decline to participate. 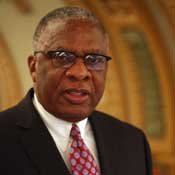 Speaking at a press conference at the Capitol Tuesday afternoon, Rep. George Flaggs, D-Vicksburg, said it would be "irresponsible" for the state to leave billions of dollars in federal matching funds on the table.

Flaggs said he's asked Speak Philip Gunn, R-Clinton, and Lt. Gov. Tate Reeves to assemble to a commission headed by the appropriations and public health chairs of the House and Senate to study the issue.

Sen. Kenneth Wayne Jones, D-Canton, said refusing to expand Medicaid could cost the state more "on the back end" in terms of greater costs for emergency department visits by uninsured people and higher acute care costs.

Dr. Hursie Davis-Sullivan, with the Mississippi Medical and Surgical Association, said the state's fully participating in the health-care expansion would lead to better relationships with doctors and patients.

"You won't just go to the emergency room to and seen. You'll have the capability to get that prescription filled, follow up in your physician's office," Davis-Sullivan said.