Andy Kennedy in the Hot Seat 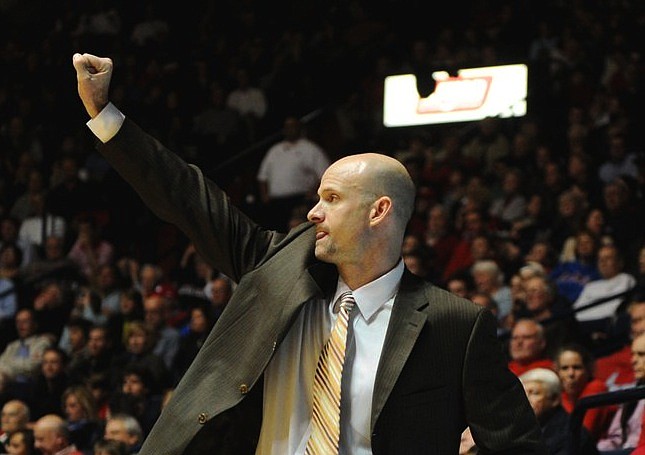 Any time a new sports season starts, people talk about contenders, the best players and, at some point, turn to which coaches are in the hot seat—you know, the coaches who need to have success to keep their job after the season.

If you were building a list of coaches that are in hot water in Mississippi, that list would begin and end with Andy Kennedy. The Ole Miss coach has not had a losing season during his time at Oxford—but he hasn’t gotten the Rebels into the NCAA Tournament, either.

There is just that one nagging omission from his resume while leading the Rebels. Every season except that dreadful ’08-’09 season resulted in a post-season berth but not the right post-season berth.

Kennedy could be called Mr. NIT because that is the only tournament he has been able to reach. In his only season as head coach at Cincinnati, he reached the NIT before leaving for Ole Miss.

Twice while at Ole Miss, he reached the NIT semifinals but has been bounced in the first round the last two seasons. So you have to wonder if this program is starting to take a step back.

Reaching the NIT is not Kennedy’s only problem—his record in the SEC is not stellar either.

In fact, Kennedy hasn’t produced a conference record better than 9-7 while at Ole Miss. On the flip side, he has never finished worse in conference than 7-9.

But there is something to remember: In basketball, the SEC is not the ACC, Big East or Big 10. You could rank the Big 12 over the SEC until Texas A&M and Missouri jumped to the conference this season.

The only teams in the SEC recently that have been true basketball powers are Kentucky (nearly always a power) and Florida (a recent power). Tennessee and Vanderbilt have been solid programs but were in the east.

Only Auburn has not been to the NCAA Tournament from SEC west division since Kennedy came to Ole Miss. The Rebels have the longest NCAA Tournament drought in the SEC, even with Texas A&M and Missouri joining the conference.

The last time Ole Miss reached the NCAA Tournament was 2002. Their head coach was Rod Barnes, and the Rebels were trounced by 80-58 UCLA in the first round of the tournament.

Since Kennedy took over, the NCAA Tournament has expanded to add four more teams.

Time has to be running out on Kennedy at Ole Miss. How much longer can Mr. NIT keep his job if he can’t even get his team into the field of 68?

Is Ole Miss basketball content to just reach the NIT? Or is it time to thank Kennedy for the job he has done and find someone else to take the program to the next level?

We will have our answer if this season ends in another NIT berth—or no post-season bid at all.

Thankfully, not many people read the JFP for sports coverage. Either you are very young and/or you have a lack of understanding of Ole Miss basketball. Andy Kennedy will be just fine after this season. Winning 20 games a season is no small accomplishment at Ole Miss. Sure, we would like to get into the tournament (and I think we will this year) but there have only been 11 20 win seasons in the entire history of Ole Miss basketball. Kennedy has 5 and is well on his way to his 6th this year, Barnes had 3, Rob Evans had 2 and George Bohler had 1 during the 1937-38 season which is even before my birth. Kennedy has brought the talent level to a much higher level than any other coach who has preceeded him at Ole Miss. It would be extremely foolish to let him go and go through the down period that most programs experience when they change coaches. Ask Mississippi State how their coaching change is working out for them.

Try to keep it civil, kdavis, even if the discussion is about Ole Miss. You clearly know very little about the author of the piece.

I don't know why I even bother to respond because no one reads this but here goes. I saw this headline "Andy Kennedy in the Hot Seat" shortly after Andy Kennedy's basketball team had a convincing win at Tennessee, something that the Rebels have not done since 1991. I thought what the hell is he talking about. I realize this article was written on 12/26 when the team was 10-2 fresh off a 3-1 road trip to Hawaii and California. Even then, I don't think AK's job was in any serious jeopardy. What Mr. Flynn fails to realize is that the 4 seasons before AK took the helm, the Rebels went 17-37 in SEC games under Rod Barnes. Barnes was a great guy but a not so great recruiter. The talent level in Oxford was not SEC caliber. A change was made and AK went 31-33 in the next 4 seasons at Ole Miss, a 14 game improvement over the previous 4 seasons. Are you going to fire a coach like that? I think not. This year, Ole Miss has the most talent that they have had since Kennedy was hired. The addition of National Juco POY, Marshall Henderson combined with one of the best frontlines in the SEC gives the Rebels a lot of options. While AK has not made it to the NCAA's, each year this team has been close and this year's team is in good position to breakthrough and make it to the Big Dance. My other beef with this article is this. Mr. Flynn writes "If you were building a list of coaches that are in hot water in Mississippi, that list would begin and end with Andy Kennedy. Let's see, of the 6 Division 1 coaches in the State, only Tevester Anderson at JSU has coached longer than AK with 10 years. Luther Riley is in his 2nd season at Alcorn and Mississippi State, MVSU, and USM all have coaches in their 1st seasons. I think as a state we have had enough turnover the past 2 years. I don't think anyone is in hot water except Tevester Anderson's seat might be getting a little warm although Anderson has had 8 good seasons at JSU before last year and this year. Mr. Flynn seems to be guilty of trying to create controversy where none exists. Todd, I hope this comment passes your civility test. Frankly, I think repeatedly calling a good basketball coach "Mr. NIT" is a bit uncivil. If the Rebels are successful and get into the NCAA this year, I hope Mr. Flynn is man enough to say I was dead wrong on 12/26/12.

Hey kdavis... yes, you did a little better. You're free to disagree with folks, just do it agreeably. (And, for the record, I've seen Bryan be more than "man enough" when prognostications have gone wrong in the past.) If Ole Miss ends up in the NIT will you be back? Time will tell! :)

I am sorry I missed your post. I am recently adjusting to life as a stay at home dad with a new baby girl. I am so sorry I have seemed to offended you.

Andy Kennedy has done a good job at Ole Miss but he has failed to get the Rebels into the Big Dance. If getting to the NIT mattered any more then Kennedy would be a hero in Oxford.

I'm sure you are a diehard Ole Miss supporter but you failed to realize that I said the list of coaches on the hot seat began and ended with Kennedy because of the coaching turnover. SWAC coaches will get more rope because they have only one road to making the NCAA Tournament and that road is winning the conference tournament.

Kennedy and the Rebels also play one of the softest non-conference schedules you are going to find in the country. That does not help him or the Rebels out when the tournament selection committee is looking at different teams.

Combine the weak non-conference schedule and the fact that Kennedy has been .500 in the SEC, a conference that will almost never be accused of being a power conference in basketball, it leads to the Rebels being on the outside looking in.

If you take exception to what I wrote you must have written into every college basketball preview in the country. Just about everyone I read mentioned Kennedy being on the hot seat. That is unless ESPN, CBS Sports, Fox Sports and other get more respect out of you because of the website the article is published under than I do at the Jackson Free Press.

I root for every team in Mississippi to do well in every sport. I have no beef, as you put it, with Ole Miss or Kennedy but he has under-produced. He has underachieved even more so if you look at the job done by Hugh Freeze in his first season.

I'm not going to give credit to Ole Miss for running up a big non-conference record in December when the Rebels have played a bunch of easy games. Ole Miss recently got a very big win at home against Missouri this past Saturday and it will go a long way to helping them get into the tournament this year.

And for the record I think Ole Miss will get in the NCAA Tournament. Also, if you read the JFP College Basketball Preview story you will understand even better why Kennedy is on the hot seat.

Thank you for the feedback. It is always appreciated. Also, I think MSU is very happy with their coaching hire after Pat Forde mentioned him in his column today.