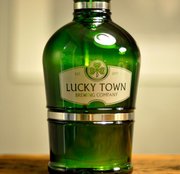 Lucky Town, the metro area's first commercial brewer, will release its first draft beers to the area with a celebration at Underground 119 Dec. 15.

Capital city beer drinkers will get their first taste of draft beers from the Jackson metro area's first commercial brewer this week.

Lucky Town Brewing Co. will release its two beers, The Flare Incident and Ballistic Blonde, on tap with a celebration at Underground 119 Dec. 15. The party isn't all about beer, though. Lucky Town is also using the celebration to collect toys for the Blair E. Batson Children's Hospital. Anyone who brings a new, unopened toy to Underground 119 that night will get a gift from Lucky Town in return.

"Bring a toy and have your first pint on us," Angela Aiello, special events coordinator for Lucky Town, said.

Lucky Town purchased its first 30-barrel fermenting tank and installed it at Back Forty Beer Company in Gadsden, Ala., in September. That's where they brew all Lucky Town beers, for now.

"We definitely want to have our own facility," Sales and Marketing Director Chip Jones said. "This is kind of like phase one in order to get toward that goal. We're saying probably 18 to 24 months is when we'd like to break ground on our own facility."

Brewmaster Lucas Simmons decided in 2011 to expand his home-brewing hobby into a full-fledged, and legal, brewery. So he joined forces with three like-souls: Jones, Aiello and Research and Development Director Brandon Blacklidge.

Simmons returned from Vermont Dec. 10, where he completed the final week of a 23-week class called the Intensive Brewing Science and Engineering Program. There, Simmons learned the ins-and-outs of brewing from experienced professionals.

Lucky Town hopes Simmons newly gained expertise will turn into new brews in the near future, but for now the company is focused on getting their current beers on taps across the metro area.

The party at Underground 119 will start at 6 p.m. with free entry until 8 p.m., after which there will be a $10 cover at the door. New Orleans-based blues guitarist Bryan Lee will take the stage at 9 p.m. and play throughout the night.

Lee has been a staple on the New Orleans music scene since the 1980s, and received a Grammy nomination in 2011 for his guest appearance on Kenny Wayne Shepherd's "Live! In Chicago" album.

The Flare Incident and Ballistic Blonde are the Gluckstadt-based brewery's first year-round beers. The former is a Lucky Town's flagship brew, an oatmeal stout brewed with Vermont maple syrup, brown sugar and black roasted barley. The Flare Incident won first-place honors in both the "Stout" and "Overall Big Beer" categories at the Keg and Barrel Outlaw Homebrew Competition in 2010 and First Place in the "Stout" category at Jacktoberfest 2011.

Jones said casual beer drinkers shouldn't let The Flare Incident's dark color drive them away. "A lot of people think that stouts are heavy, when most stouts traditionally are very light as far as body and character goes" Jones said. "(The Flare Incident) is very flavorful. A lot of the chocolate malt and black barley is what gives it that dark color."

Ballistic Blonde may lend itself more to those who are looking for an easy-drinking beer. The Belgian-style blonde ale is brewed with Victory and Melanoiden, Pilsen and Munich malts, and Styrian Goldings and Perle hops. "Most of the blondes that are available around here are American blondes," Jones said. "(Ballistic Blonde) is a little bit different. It uses a different yeast that gives it a lot more of a fruity, kind of banana notes to it. It's similar to a hefeweizen."

After the party, the beer will be available on tap at 15 to 20 Jackson-area locations, including Fenian's Pub, Wing Stop, Hal and Mal's, Martin's, Parlor Market, The Bulldog, and Sal & Mookie's.

Aiello said Lucky Town hopes to have events at all of the metro-area tap locations, but that she hasn't confirmed the other celebrations yet.