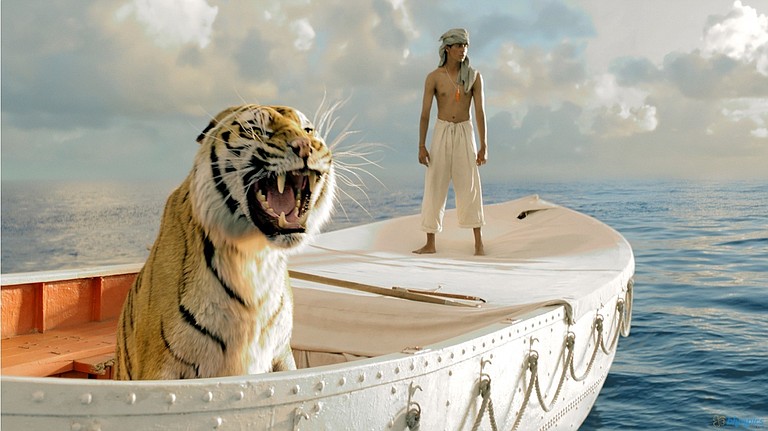 "Life of Pi," directed by Ang Lee, is that rare movie achievement where grace and beauty elucidate something far more significant than shimmery images on the screen or plot points of a skinny Indian boy sharing a lifeboat with a Bengal tiger. Pi tells us: "Life on a lifeboat isn't much of a life. It is like an end game in chess, a game with few pieces. The elements couldn't be more simple—nor the stakes higher."

The movie opens on Piscine "Pi" Patel (Irfan Kahn), a soft-eyed, middle-aged Indian gentleman. He prepares a vegetarian lunch for a writer (Rafe Spall) who has traveled from India to hear Pi's unusual story.

Pi's story starts in Pondicherry, India, when he was a boy.

The camera hovers through a zoological paradise flowing with hummingbirds, flamingos, parakeets and other bright and untamed creatures.

Pi's parents (Adil Hussain and Tabu) manage the zoo. His mother tends to the botanical gardens, and his father oversees the animals. A herpetologist assists in Pi's birth, and Pi's honorary uncle Mamaji teaches him to swim, which is a skill that later proves important to his survival on the high seas.

Pi's full name, Piscine, means "pool" in French and shares a derivation with the astrological sign of Pisces or fish. His classmates, however, taunt him by calling him "Pissing." Pi's a resourceful boy, and he trains his classmates and teachers to call him Pi after the mathematic symbol, an almost impossibly long number abbreviated simply as 3.14. Pi also collects religious beliefs, starting with Hinduism and its 33 million gods.

"Faith is like a house with many rooms," Pi explains. There is a room for doubt, but there is also room for different traditions.

Pi's enchanted world crumbles after Richard Parker joins the zoo. Richard Parker, a misnamed Bengal tiger, is a stunning specimen of feline ferocity. Looking into the tiger's eyes, Pi mistakenly believes that Richard Parker can be his friend, but his father shows him that the tiger has its own untamable nature. It's a visceral teaching lesson.

When the zoo goes broke, Pi's father packs up the family and some of the more valuable animals on a Japanese cargo ship bound for Canada. A fatal storm sinks the large ship. The only survivors are Pi, a zebra with a broken leg, an orangutan, a nasty hyena and Richard Parker, afloat together on a lifeboat. A blood bath in the tiny boat ensues, after which only two remain: Pi and the tiger.

During the harsh journey on the lifeboat, the line between man and beast gets blurred. To survive, Pi must find a way to co-exist with Richard Parker. To weaken the tiger, Pi makes the tiger sea sick, apologizing for what he must do. "Sorry for the choppy ride," Pi says.

Pi and the tiger become bone thin, scraping together fish and rainwater to survive. Pi realizes that the tiger has as little experience as he does in the matter of survival. But the tiger keeps Pi alert and tending to the tiger's needs gives Pi purpose. Without Richard Parker, Pi would die, and oddly, when survival is the only driving force, survival seems irrelevant.

Lee ("Crouching Tiger Hidden Dragon," "Brokeback Mountain") is one of the masters of the cinematic medium. Here, Lee's eye and mind have worked together at the highest levels. The scenes are so sumptuously gorgeous and sustaining. This film is one of the best of the year.

The movie has the disturbing power of great art; you don't leave the theater quite the same. Among other things, it made me think differently about the book by Yann Martel, which didn't grab me during the first read as it did for so many people. Lee's movie transforms the book into a three-dimensional paradox of gruesome realism and enchanting fable. It's a work so powerfully felt and so intensely expressed that somewhere along the way you feel better about the world.