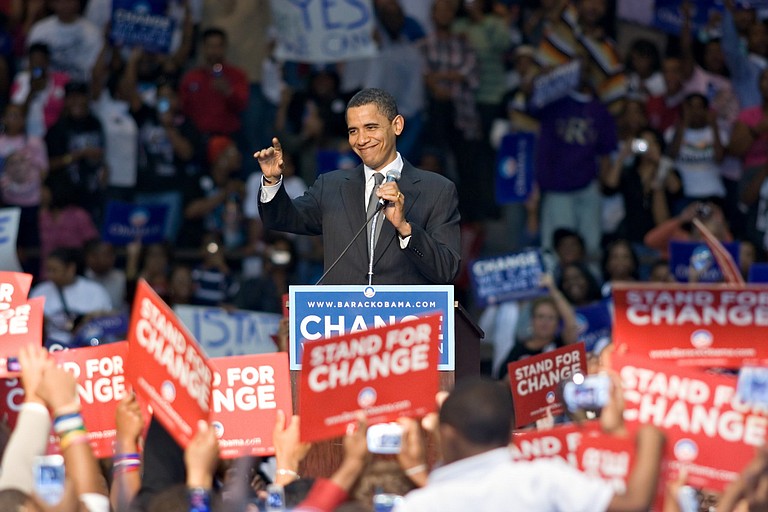 COLUMBUS, Ohio (AP) — President Barack Obama told Ohio students Tuesday that proposed Republican cuts to college aid show that opponent Mitt Romney "does not think investing in your future is worth it," using personal terms to try to paint his opponent as eager to help the wealthy at the expense of working families.

Obama invoked his own years of paying off student debt and criticized Romney for urging kids to ask their parents to lend them more money and to "shop around" if they are trying to figure out how to afford college.

"Not everybody has parents who have the money to lend. That may be news to some folks," Obama said during an appearance at Capital University in Columbus, noting the "mountain" of debt he and wife Michelle faced after graduating from college and law school.

The president said "putting a college education within reach for working families doesn't seem to be a priority" for his opponent. He said Romney would use proposed budget cuts to Pell Grants and other student aid to pay for tax cuts for the wealthiest Americans.

Romney, Obama said, is offering "a vision that says, "we can't help young people who are trying to make it because we've got to protect the folks who already have made it."

The president was pointing to the budget plan put forward by Romney's running mate, Rep. Paul Ryan, in trying to paint the GOP ticket as too extreme for the nation. His campaign criticized Ryan's budget proposal for cutting $115 billion from the Education Department, removing 2 million children from Head Start programs and costing 1 million college students their Pell Grants over the next decade. The push will be coupled with television ads.

Romney campaign spokeswoman Amanda Henneberg said it's Obama who has failed young Americans. "Under this president, too many young Americans are suffering from higher college costs, more debt, and a lack of good jobs when they graduate," she said in a statement.

Obama was campaigning later in the day at a community college in Reno, Nev.

Ryan didn't address the education criticism during remarks at a steel plant in Carnegie, Pa., though he defended the Republican ticket's plan to overhaul Medicare and criticized Obama for what he called "a whole lot of distortions."

The Wisconsin congressman criticized the president for his 2008 remark that frustrated voters "cling to their guns or religion."

"Hey, I am a Catholic deer hunter. I am happy to be clinging to my guns and my religion," Ryan said to cheers.

Romney was holding fundraisers in Texas as Ryan campaigned in Pennsylvania. Ryan planned an afternoon visit to the American Helicopter Museum and Education Center in West Chester. He then was set to fly to Virginia, a state Obama won in 2008 but which is looking more difficult this time around.

Since Romney tapped Ryan as his running mate, Democrats have aggressively highlighted what Ryan's budget would mean for Medicare. Ryan's plan would allow those 55 and older to stay in the health care program for seniors as it is currently set up, but would also offer private alternatives for younger workers. That has left some voters skittish.

Ryan worked to reassure those voters Tuesday. "Medicare is important to each and every one of us," he said. "Somebody in our family relies on this program or is about to rely on this program."

Those estimates assume the cuts in Ryan's budget are applied evenly across all programs starting in 2014 — something Ryan aides say would not happen. His budget does not directly address Pell Grant funding, and his aides say the cuts would not take a one-size-fits-all approach.

The Democratic National Committee also planned to join the criticism. Officials released a Web video that mocked Romney's suggestion that college students would do better to "shop around" for tuition rates and college loans. The ad suggested that Romney doesn't understand students' struggles to pay for college.

The Ryan budget, which failed to pass the Democratic-controlled Senate, would cut annual nondefense spending by 5 percent in 2013. The next year, it would be a 19 percent cut.

Ryan, who prefers that students take loans instead of receiving grants, would keep the top Pell Grant award in the coming school year at $5,500 but in future years reduce the number of students eligible, not the award sums. In other words, fewer students would receive them but the neediest would not see their awards changed.

"Mitt Romney and Paul Ryan have a plan for a stronger middle class to get our economy back on track and ensure that young Americans — and all Americans — have the brighter future they deserve," Ryan spokesman Brendan Buck said.

More than 9.7 million students are expected to get grants for the academic year that is about to begin.

Young voters overwhelmingly favored Obama in 2008, and he continues to enjoy a sizable lead in polls — although not as wide as four years ago. Their parents are less convinced, and they are as much Obama's audience as their children.

"I think I remember reading something about Ryan trying to cut money for college. Andrew goes back to school pretty soon. We sure need that Pell Grant," a voter says in one ad.