Oiled Up and Shirtless 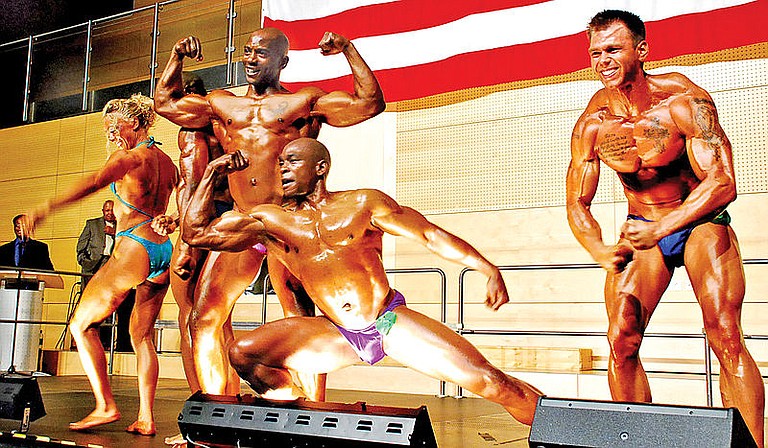 Watching bodybuilders is well worth the $20 price of admission. Chrystal Smith

Like many Americans, for the past two weeks, I have tuned in to watch the world's top athletes compete in the Olympics. It's an amazing display of national pride, power and grace and, at least on my couch, analysis such as, "The female swimmers seem to have the best nail art."

This year, I felt particularly primed to appreciate some good muscles. Just before the Olympics started, I attended the 2012 National Physique Committee's Mississippi Bodybuilding, Figure, Bikini and Physique Championships (npcmsbodybuilding.com). This competition was the statewide qualifier for a national competition, featured men's and women's divisions and was, quite simply, nothing short of amazing. I consider the $20 cost of admission a bargain for the entertainment, particularly because the proceeds benefitted the Mississippi School for the Deaf.

It all started with a poster at the Courthouse Gym advertising the competition. I hadn't even noticed it, but the Fellow pointed and eagerly informed me that we were going. Convinced that the heavy-iron-pumping dudes at the gym are quite enough for me to handle and that I didn't need to see a whole competition of bodybuilders, oiled up and shirtless, I brushed it off and forgot about it. Little did I know ...

Not until the week of the competition did I learn enough about bodybuilding and fitness competitions to increase my excitement level exponentially. Informed that some competitions include a couples category—in which a man and woman wear a matching bikini and briefs and flex in a synchronized choreographed routine—I immediately turned to YouTube to research it. I crossed my fingers that Mississippi had couples eager to participate in this category.

The competition takes place all day on a Saturday; the program we attended at Thalia Mara Hall that night is a showcase and awards presentation for the winners. Some categories are fitness categories rather than what comes to mind when you think of traditional bodybuilding à la Arnold Schwarzenegger. These people just look really, really in shape. They made me want to swear off carbs forever, and start doing about 1,000 crunches a day.

Then there are the bodybuilders, who compete in categories delineated by weight class. Going in (my research into couples competition notwithstanding), I had no idea how big a role a musical soundtracks play in the world of bodybuilding. As it turns out, each competitor comes out to a song and flexes and poses to the music. The music selections ranged from funk, soul, hip-hop, and even gospel in the light and middleweight categories to heavy on the Mötley Crüe in the heavyweight classes.

Some competitors incorporated dance moves—one even did flips—whipping the crowd into a frenzy. It's rather surreal when a huge, muscled, tanned, greased-up man comes out, and you say: "Wait a minute. Is he wearing a purple velvet bikini?" (Yes. Yes, he was.) Then, as if that's not enough, a mash-up of Michael Jackson and Funkadelic cames on, and he started walking around the stage flexing and getting his groove on. Who needs Magic Mike when you've got that? And it's Mississippi born and bred? To top it off, the winners from each category came back onstage for the judges to determine overall winners and engaged in a pose-off, which is like freestyle flexing—and amazing.

In addition to the competition itself, the special entertainment was special indeed. Guest poser, International Federation of Body Building professional Timothy Gaillard, came out and posed—I kid you not—to a song from "Dreamgirls." And later, Acrobazia, a male acrobatic duo from Canada, performed a strength-and-balancing routine similar to what you might see at a Cirque du Soleil performance but without the theatricality. By the end of their routine, the entire audience was on its feet, while my date contemplated their future back pain.

Although this competition lacked any entrants in the couples category, I'm hopeful that the regional competition next year delivers a few. Because, like Arnold said, "I'll be back." (To watch, just to be clear. You will not catch me in a bikini onstage.) I'm pretty sure the older lady I overheard as we left will be back, too. She enthusiastically exclaimed to everyone and no one in particular: "Bring back those glutes! I want to see more of those!"