More Water, Sewer, But No Raises 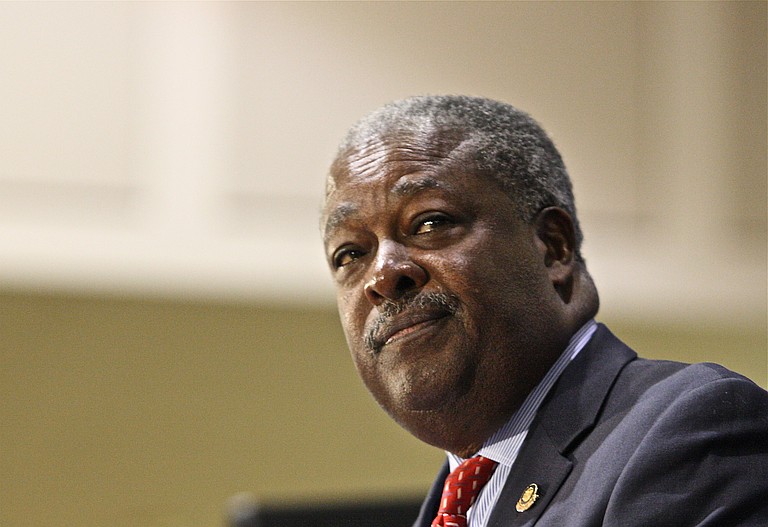 Mayor Harvey Johnson Jr. announced a major increase in water and sewage maintenance as part of his budget proposal for the upcoming fiscal year. Photo by Jacob Fuller.

JACKSON — Major increases in water and sewer spending and no raises for city employees were on the docket when Jackson Mayor Harvey Johnson Jr. unveiled his budget proposal for the upcoming fiscal year at City Hall Aug. 8.

The biggest increase is in the capital budget, which Johnson proposed to increase by 49.4 percent, to $75.1 million from this year's $50.2 million. The majority of that money, he said, will go towards improvements in the city's water and sewer systems.

Jackson City Council President Tony Yarber told the Jackson Free Press Aug. 10 that he was happy to see more money going to a maintenance plan for water and sewage. He said that is something he has been talking to the mayor about since he joined the City Council in 2009.

Yarber said the mayor even made a joke nodding to the Ward 6 Councilman's involvement after announcing the plan at City Hall.

"I was more than excited," Yarber said.

The mayor also announced what the budget won't include: raises for city employees. Although the city was able to budget raises last year, even while other cities across the South and cities similar in size to Jackson were unable to provide them, Yarber said the money just isn't there to offer raises next year.

Ward 1 Councilman Quentin Whitwell told the JFP he would like to see changes to the city's payroll in the opposite direction.

"I feel like the payroll is the most bloated part of the budget," Whitwell said. "We know the mantra: (Johnson) wants to say he didn't fire anybody, and he didn't raise taxes." The council will only have so much input, Whitwell said, but he would like to see the mayor cut payroll expenditures where he can. That's something Whitwell said he will enjoy looking into.

Yarber would like to see the city's spending streamlined. He said the city needs to look at employees and contractors and make sure it is getting the best bang for its buck.

The mayor allocated $1.163 million to street resurfacing next year. On top of that, though, Johnson said he would like the city to request a $10 million bond issue to apply to resurfacing. He believes the city can pay for it with the portion of property taxes that already go to street repair.

"I believe we can pay for it over time with our dedicated street resurfacing millage," Johnson said at his budget announcement.

"We could pave many more streets, and these bond funds could leverage millions of more federal and state grant projects for roads and bridges. Although not an ideal means of funding street resurfacing, our streets are in such bad condition that a significant amount of money is needed now to address the problem, and a bond issue would provide that level of funding."

Yarber is conflicted over the bond proposal. While many streets in the city need repaving, the city needs to deal with the water and sewage issues below the streets first, he said. The street problem isn't just 10 or even 15 years old, he indicated. It is a long-term problem, and it needs long-term solutions.

Whitwell said he was surprised to hear Johnson say he was looking into a bond issue for street repaving. The Ward 1 Councilman hadn't made a decision about it, yet, though.

"I thought he said after last term that he didn't believe in bonding streets," Whitwell said. "I'm going to have to hear more details before I say if it's a good idea."

Both Whitwell and Yarber said they want to see more money go into the city's Parks and Recreation Department than what the mayor proposed. Yarber wants to see funding for three main aspects of the department.

First, he wants to see more aesthetically pleasing parks. He said that requires more than just lawn care; it requires implementing things like artwork and artistic landscaping to the parks. Second, Yarber wants to see the city retrofit parks with modern equipment, specifically equipment that focuses on health and wellness, such as exercise equipment.

Lastly, Yarber wants to see the Parks and Recreation Department team up with Jackson Public Schools to implement better after-school programs for the city's youth. The city needs to massage its relationship with JPS, he said, and after school programs in parks could do just that.

"I think (Yarber) and I are on the same page on that one," Whitwell said.

Chris Mims, the city's director of communications, said the city expects to bring in $1.1 million in sales tax above what it projected for the current fiscal year.

At his budget announcement, Johnson indicated that the increased revenue, as well as a 1.8 percent population growth since 2010, will help fund the city's budget increases.