Laugh 'Til You Cry 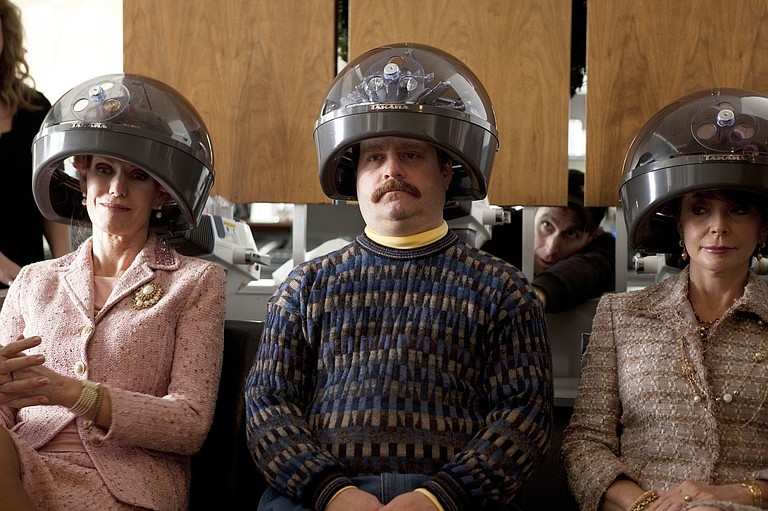 "The Campaign" squares off Will Ferrell and Zach Galifianakis as opposing candidates running for a U.S. congressional seat from the Tar Heel State of North Carolina. Ferrell plays the four-term incumbent, Cam Brady, a political schlock whose empty words appeal to constituents. "America, Jesus and freedom," Cam says, not quite understanding what, if anything, the slogan means.

Cam's fifth term is in the bag, until he leaves a pornographic message for his mistress on the wrong answering machine. That's when billionaires Glen Motch (John Lithgow) and his brother Wade (Dan Aykroyd) seize the opportunity to put up their own candidate. (Not so subtle, is it? Whiny babies David and Charles Koch have taken offense at being satirized as self-interested billionaires pouring millions of dollars into political campaigns. It sounds like the truth. Isn't that a defense or something?)

Pickings are slim in the 14th district, and the Motch brothers settle on Marty Huggins (Galifianakis), a mild-mannered, Twinkie-popping, pug-loving, pudgy family man. He speaks with a slight lisp and loves his job as the local director of tourism. Marty's an odd choice, but he holds the right pedigree: an old family name and money. His daddy (Brian Cox), a curmudgeon from the Jesse Helms days, pays his Asian housekeeper (Karen Maruyuma) an extra $50 bucks a day if she speaks to callers in a voice like Miss Prissy from "Gone With The Wind."

"It reminds him of the good old days," she says. "Yessum. It shore does."

Wanting to make his father proud, Marty agrees to the Motches' proposal. Marty puts on his "big boy Spanx" and finds his inner fighting dog. "This dog has a ton of dog in him," Marty says.

The Motch brothers send in Tim Wattley (handsome Dylan McDermott), a Gestapo-like campaign manager, to teach Marty the ropes. "Life as you know it is over," Wattley states. Wattley swaps out the "commie-loving" Chinese pugs with American dogs that rate high among voters. He replaces Marty's home furnishings with leather, deer heads and a painting of a bald eagle over the fireplace. Under Wattley's tutelage, Marty transforms from a "crapped-out hobbit" (as he is referred to by his daddy) to a viable congressional candidate. While Marty ascends in the polls, Cam's incumbency disintegrates into sex tapes, holy wars and acts of hysteria.

The film, directed by Jay Roach ("Austin Powers: International Man of Mystery," "Meet the Parents"), is split-your-guts funny. The raunchy over-the-top humor matches its subject: mud-slinging and unsavory campaigns that have become de rigueur in the current climate of national elections.

But when you strip away the gags and grins, the movie is a poster child for campaign reform. When people first saw Stanley Kubrick's "Dr. Strangelove or: How I learned to Stop Worrying and Love the Bomb," circa 1964, they laughed at the absurdity of Peter Sellers' Dr. Strangelove. They called it a comedy, but when the laughter died off, the realization hit that a nuclear war caused by a mistake was not so far-fetched.

In the same vein as "Dr. Strangelove," "The Campaign," written by Chris Henchy and Shawn Harwell, provides a reality check. We belch out big laughs for Ferrell and Galifianakis, who have perfected the intonation of empty words, but what this movie says is "wake up and smell the campaign abuse."

You may have missed this, but in 2010, the United States Supreme Court in Citizens United v. Federal Election Commission held that laws prohibiting corporate and union political expenditures violated the First Amendment. Some believe this case allows corporations and unions "to give unlimited amounts to third party groups, such as Super PACs, to make independent expenditures in federal races," wrote Fred Wertheimer in February He is the founder and president of Democracy 21, a nonpartisan public policy organization, in "Citizen United and Contributions to Super PACs: A Little History is in Order," posted on huffingtonpost.com. "Super PACs are playing a major role in the 2012 presidential primaries and will continue to be a major factor throughout the 2012 presidential and congressional races."

In fact, the winning candidate in "The Campaign" (who will not be named) refers to the Citizen United opinion during a congressional hearing, which appears after a few ending credits have rolled.

So what is the price of democracy and free elections? "The Campaign" does not hedge. When you stop laughing, you might start crying.