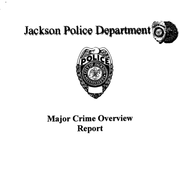 JACKSON — Major crimes in Jackson are down 20 percent from last week.

For the week of July 30 to Aug. 5, a total of 203 major crimes were reported in Jackson compared to 255 in the previous week.