Curiosity Floods Us with Images of Mars 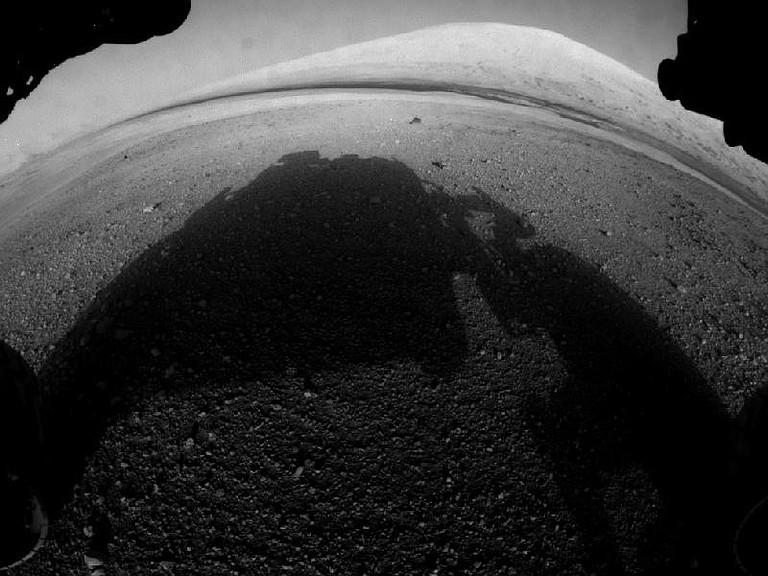 "This full-resolution image shows one of the first views from NASA's Curiosity rover, which landed on Mars the evening of Aug. 5 PDT (early morning hours Aug. 6 EDT). It was taken through a "fisheye" wide-angle lens on one of the rover's front Hazard-Avoidance cameras. These engineering cameras are located at the rover's base." --Nasa.gov

PASADENA, Calif. (AP) — NASA's latest adventure to Mars has given the world more than just glimpses of a new alien landscape.

It opened a window into the trip itself, from video footage of the landing to a photo of the rover hanging by a parachute to a shot of discarded spacecraft hardware strewn across the surface. And the best views — of Mars and the journey there — are yet to come.

"Spectacular," mission deputy project scientist Joy Crisp said of the footage. "We've not had that before."

Since parking itself inside an ancient crater Sunday night, the Curiosity rover has delighted scientists with views of its new surroundings, including the 3-mile-high mountain it will drive to. It beamed back the first color picture Tuesday revealing a tan-hued, pebbly landscape and the crater rim off in the distance.

Locale aside, Curiosity is giving scientists an unprecedented sense of what it took to reach its Martian destination. The roving laboratory sent back nearly 300 thumbnails that NASA processed into a low-quality video showing the last 2 1/2 minutes of its white-knuckle dive through the thin Martian atmosphere.

In the video, the protective heat shield pops off and tumbles away. The footage gets jumpy as Curiosity rides on a parachute. In the last scene, dust billows up just before landing.

NASA twice tried to record a Mars landing. In 1999, the Mars Polar Lander carried similar gear, but it slammed into the south pole after prematurely shutting off its engines. Another effort was aborted in 2008 during the Phoenix lander's mission to the northern plains when mission managers decided not to turn it on for fear it would interfere with the landing.

"It's too emotional for me," said Ken Edgett of the Malin Space Science Systems, which operates the video camera. "It's been a long journey and it's really awesome."

The full high-resolution video will be downloaded when time allows and should give the first peek of a landing on another planet.

Curiosity's journey to Mars spanned eight months and 352 million miles. The rover gently touched down Sunday night after executing an elaborate and untested landing routine. The size of a compact car, it was too heavy to land using air bags. Instead, it relied on a heat shield, parachute, rockets and cables to lower it to the ground.

During its seven-minute plunge through the atmosphere, Curiosity shed the spacecraft parts. On Tuesday, scientists got their first view of the castoffs. The eagle-eyed Mars Reconnaissance Orbiter had circled over the landing site and spotted Curiosity and the scattered parts.

The parachute appeared to be inflated, and the rocket stage that unspooled the cables crashed 2,100 feet from the landing site.

Earlier this week, the Mars Reconnaissance Orbiter caught Curiosity sailing through the Martian skies under a parachute. It was only the second time a spacecraft has been photographed on a parachute; the first was Phoenix during its descent to the surface.

The nuclear-powered, six-wheel Curiosity will spend the next two years chiseling into rocks and scooping up soil at Gale Crater to determine whether the environment ever had the right conditions for microbes to thrive. It will spend a chunk of its time driving to Mount Sharp where images from space reveal signs of past water on the lower flanks.

It'll be several weeks before it takes its first drive and flexes its robotic arm. Since landing, engineers have been busy performing health checkups on its systems and instruments. Early Wednesday, a flood of black-and-white pictures of the Martian horizon and rover's deck poured in, which NASA will use to stitch together a panorama. Over the next several days, Curiosity was poised to send back even better pictures, including a 360-degree color view.