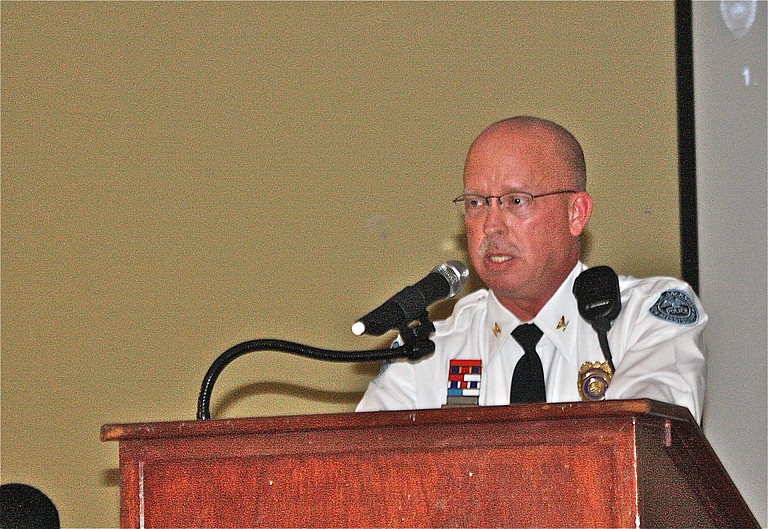 The Jackson Police Department has finished redistricting Precinct 4, which covers the area from Fortification Street to County Line Road and the West Street railroad tracks to the Pearl River.

Under the direction of Commander Wendell Watts, the precinct added two beats, expanding from eight beats to 10. In addition, 12 new officers joined the precinct to help cover the additional beats. It was the first redistricting in the precinct since 1996.

"We put the beat structure and communications (through a) test run Friday to see how it worked across the weekend," JPD Chief Rebecca Coleman said.

Between 100 and 200 people, about half of them JPD officers, gathered Monday for the Precinct 4 redistricting ceremony at Fondren Hall on North State Street. The precinct has 45,406 residents and more than 1,300 businesses.

One of the reasons for the decrease, Watts said, was his expectations for his officers .

"I gave them all challenges by telling them, 'I want you to go 30 days with having a positive attitude. I want y'all to go in with everything happy.' And they did. They started showing much better interest in wanting to come to work (and) make a difference," Watts said.

Since Watts became commander in 2010, the precinct has seen a 14-percent decrease in reported crime. Watts' goal for this year with the extra officers is to reach a 25-to-30-percent decrease.

Mayor Harvey Johnson Jr. agreed with Watts that the redistricting was needed and that putting more police on the streets will mean less crime.

JPD redistricted Precinct 1 earlier this year and is determining whether the move is needed in the other precincts.