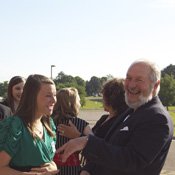 Delores Williams remembers going to school as a child, seeing white children ride by in a bus while she and the other black students walked, carrying their books. She also remembers having to step off the sidewalk when a white person passed.

"It's not right, young people," she told a group of students at Northwest Rankin High School this morning. "It wasn't right then; it's not right now."

When she was a student at Lanier High School, just 15 years old, Williams started going to civil rights meetings with some of her friends, and eventually joined the Freedom Riders, who sought to integrate public transportation in the South. She didn't tell her family about the meetings--or about getting arrested with the Freedom Riders--for fear that they would stop her from going.

"I had heard about Emmett Till being murdered for whistling at a white woman," she said, although white boys got away with whistling at black girls like her. "But don't you all lie to your parents," she added with a smile at the teens sitting around her.

Williams and three other Freedom Riders--Margaret Leonard, Hezekiah Watkins and Bob Zellner--spoke to groups of students at Northwest Rankin today as the culmination of an effort by Students with a Goal, or SWAG. The students have been studying the Freedom Rides and the Civil Rights Movement in Mississippi this year.

"I've been living here my whole life, and I never heard a lot of this stuff," said Tasi Jones, a junior at the school and a member of SWAG. "It feels really great to know stuff that's shaped Mississippi and how far we've come."

After hearing some of the Freedom Riders speak at an event last summer to mark the 50th anniversary of the rides, the students from SWAG decided to invite them to Northwest Rankin. They stayed after school to study the Freedom Rides and put together a display about what they learned in the foyer of the school's Performing Arts Building, complete with stories and photos of the people who spoke at the school this morning.

Krysta Zuvic, a senior at Northwest Rankin and a member of SWAG, said meeting the Freedom Riders in person makes the Civil Rights Movement seem more real than simply reading about it in a textbook.

"What's crazy is that you read about it in a book (and think), 'Oh, that's past, that's history.' They simply glance over it. ... That wasn't that long ago," she said.

Williams told the students that racism is still alive and well in their generation, as evidenced by Deryl Dedmon and other Rankin County teens who participated in the murder of James Craig Anderson, a black man, last year.

"Please don't be a follower," she said. "You guys know what happened over here in Rankin County."

Zellner encouraged the students to make a difference in their own communities.

"It's always small minorities, like you guys, who take the lead," he said.