A Lesson, With Muscadines 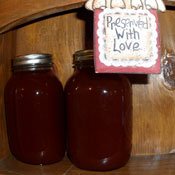 Don't let a few bees stop you from making and enjoying muscadine jelly.

One clear and sunny day in the little community of Browning, just outside Greenwood, Father sent my brothers and me to the fields with a wagon and mule to gather watermelons. It was 1959, and I was about 5 or 6 years old. My father was a figure of power and control and, normally, we didn't mess with him.

On the way to the watermelon field, we pulled the wagon under a most enticing arbor. Above our heads was a whole orchard of ripe muscadine grapes just waiting to be picked, and the wagon was the perfect height. Joseph and John stopped the wagon. David and I were in the wagon bed, and we all reached up to pick the dark purple juicy fruit.

Our little black and white wire-haired mutt, Dan, always traveled with us, and this day was no exception. Dan began to chase his tail, going round and round. All at once, he made a fast beeline toward the road. We wondered about Dan, but the fruits were too tempting for us to stop and investigate.

Then the mule began to twitch and sputter. All of a sudden, it took off as if it was trying to win the Kentucky Derby. The force threw David and me to the back of the wagon. He yelled for me to jump, but I was not about to--that wagon was surely was moving at 90 miles per hour. So he pushed me out.

A half-hour later, Joseph and John came back with only the mule in tow. The wagon, which we had parked on top of an underground hornet's nest, was completely destroyed. To this day, pieces of that wagon still lie in the woods, a lesson to me about avoiding temptations and obeying Father.

Pour the juice into a large boiler, add pectin and stir. Bring mixture to a rolling boil that cannot be stirred down. Add the sugar all at once, and bring to another rolling boil. Stir for one minute. Pour into prepared hot jars leaving 1/8 inch empty at top.

Seal and invert for five minutes. Tighten seal again, and store in a dark place until set, from one to five days.

Be sure to wash and sanitize your jars in a boiling water solution just prior to canning. Your measurements should be exact. Do not reduce sugar and do not use sugar substitutes.

To make muscadine juice from scratch, you'll need about five pounds of grapes. Wash and place them in a boiler, covering with water. Bring to boil and boil until the grapes plump. Lower heat to medium and cook down to pulp, about one to three hours. Strain the juice out through cheesecloth.