The Art of the Mash-Up 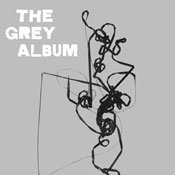 "The Grey Album" is a recent book on hip-hop.

Lemuria employee Simon Hamburg has been on a mission. During the first few months of his employment, he noticed that the music-book section in the store looked "untouched." He knew there were some good books, but they were all too high up on the shelf to reach. He moved them down and re-arranged titles to give the area a fresh look.

He then realized that a good number of the books were biographies and noticed an absence of books that dealt with the cultural and critical side of music. Because he's my friend, Simon asked if I would put together a list of books on hip-hop that I thought the store should carry. Simon put the list to use and supplemented it with a host of other new titles. "I just want to fill the section up with things I am interested in," he told me. Hamburg, 23, wants a section that has something for all music fans.

The first book in this new series is "The Grey Album" (Graywolf Press, 2012, $25, paperback) by poet and professor Kevin Young, who offers up his first tome on cultural criticism.

The title is homage to producer Danger Mouse's 2004 album of the same name. The moniker comes from the fact that Danger Mouse created "The Grey Album" by mashing up (or remixing) The Beatles "The White Album" with Jay-Z's "The Black Album." Clever, huh? The result was a classic album that redefined how people viewed remixes, and sampling in general.

Young does similar work with his book, which is a mash-up in its own right of literary and music criticism, stream of consciousness, autobiography and opinion. Further, Young mashes up voices from across historical eras and genres (don't be surprised to see the words of Langston Hughes interacting with those of Outkast). Young's book is dense with layers that don't compete with each other, but cooperate.

"Throughout this book I'm interested in the ways the fabric of black life has often meant its very fabrication, making a way out of no way and making it up as you go along," he writes in the introduction. This central idea ties the book together, connecting black history, black literature and all forms of black music. For example, he links the in-the-moment creation of improvisation in a Louis Armstrong solo to creating of hip-hop out of nothing but two turntables and someone's parents' record collection.

This "storying," he argues, is employed as a means of helping African Americans throughout history escape the realities of life in America. He traces the line back to the days of enslavement: "The black imagination conducts its escape by way of underground railroads of meaning—a practice we could call the black art of escape."

Young compares the vision of the fabled Canaan expressed by the enslaved in spirituals, field hollers and animal tales to hip-hop's creation of spaces as a form of escaping reality, such as the Wu Tang Clan's creation of the mythical Shaolin out of Staten Island.

Young's "The Grey Album," like its musical predecessor, is successful because of the postmodern approach of putting together whatever pieces are at one's disposal in a way that has never been heard. Danger Mouse has said of his album, "A lot of people just assume I took some Beatles and, you know, threw some Jay-Z on top of it or mixed it up or looped it around, but it's really a deconstruction."

In a very Jacques Derrida way, both Young and Danger Mouse deconstructed classic topics and works, and in the make-something-out-of-nothing ethos of both projects, put it all back together to show us that there is plenty to be learned by listening to things in a different way. It reminds me of what Simon is doing at Lemuria.