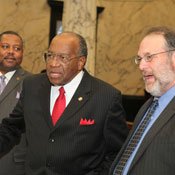 Greenwood Democrat David Jordan questioned why professed Christians in the Legislature would support a law that might hinder some citizens from voting.

Malcom White, executive director of the Mississippi Arts Commission, constantly battles the perception that his and the state's other "cultural agencies" are not core government functions.

"We're the future," White says of the MAC, which supports artists, organizations and schools with grants but also partners with the Mississippi Development Authority to boost the state's creative economy.

In other words, MAC could help create the next Jim Barksdale—the current, albeit temporary, MDA director and a pioneer in the technology field—by helping a young arts-based tech company develop a business plan or providing a start-up grant.

But in Mississippi and across the nation, funding for agencies like the MAC are disproportionately on the chopping block. Despite a recommendation from the Legislative Budget Committee that the MAC receive 7 percent less in fiscal year 2013, Gov. Phil Bryant's budget for next year calls for a 10 percent reduction to the arts agency (the MAC's line item is under the category labeled "miscellaneous").

The MAC's appropriation bill passed the House and awaits consideration in the Senate. It reflects cuts totaling $100,000 in general funds (the commission gets $1.5 million in all). White doesn't spend much time worrying about what could happen in Mississippi, however. The National Endowment for the Arts, a federal government agency, has already slashed its appropriation to the MAC by $91,000.

Since 2005, when White joined the MAC, he has seen the budget decrease year after year. As a result, the MAC now gives fewer direct grants and now stretches the MAC's dollar with more group outreach such town halls, professional development workshops, and webinars. Says White: "We're going to take a nickel and turn it into a quarter."

Voter ID Passes
Mississippi's constitutional amendment to require would-be voters to prove they are who they say they are inched closer to realization. More or less a technicality because voters gave it the thumbs up in a statewide ballot question last fall, HB 921 is the legislative vehicle to implement the controversial law. The measure, already approved in the House, passed the Senate 34-14 and now heads to a conference committee.

Sen. David Jordan, D-Greenwood, called the effort "evil" and questioned the Christian values of its legislative backers. "It's wrong," Jordan said. "I don't care how you dress it up, put clean clothes on it. It's Jim Crow."

The U.S. Department of Justice has to sign off on changes to Mississippi's voting laws, and it remains unclear how the DOJ will evaluate Mississippi's law. Republican President George W. Bush's administration let Indiana's 2005 voter ID law stand, and the U.S. Supreme Court upheld it in 2008.

Sen. Chris McDaniel, R-Ellisville, defended the bill, saying that it was not "some kind of mischief" to turn back the clock on civil rights gains for blacks. He noted that the Mississippi Senate is more diverse than it's ever been (he did not, however, acknowledge the irony that the Legislature's racial makeup resulted from resistance to Jim Crow's voter suppression effort).

Sen. Joey Fillingane, R-Sumrall, who drafted the fall voter ID initiative, said voter ID is needed since evidence of voter fraud exists from as recently as 2007, but he didn't provide more details. Opponents point to a lack of evidence of widespread voter fraud or the kind that voter ID would actually fix as a primary reason to reject unnecessary voter-ID legislation.

Sen. Kenneth Wayne Jones, D-Canton, offered a word of caution for supporters of initiatives that limit voting rights. "We beat you every time. We're going to beat you this time," Jones said.

ALEC Smarting
If your state Legislature suddenly does something that seems like the progeny of a conservative's wet dream, there's a good chance that the American Legislative Exchange Council had something to do with it. ALEC, as it's known, serves as a clearinghouse for conservative ideas and legislation at the state level. ALEC's task forces develop example bills on issues ranging from tort reform to virtual schools that state lawmakers can use to craft pieces of legislation.

ALEC has been a force behind efforts in Mississippi to expand virtual schools, introduce tort reform and implement voter identification requirements. During the current legislative session, ALECky bills include the revived anti-undocumented immigrant bill that, for now, has met defeat. But after remaining under the radar for decades, ALEC's profile has risen, as has opposition to the group.

Due to growing protests, ALEC recently lost several major corporate members, including PepsiCo, Coca-Cola, Kraft Foods and Intuit largely in response to its apparent authorship of pro-gun laws such as the Stand Your Ground law getting national attention since George Zimmerman killed Trayvon Martin, but was not charged by law enforcement that cited the law as a reason.

The Washington Examiner, a free daily newspaper in the Arlington, Va., posted a statement from Coke on its website explaining the company's decision to leave ALEC:

"Our involvement with ALEC was focused on efforts to oppose discriminatory food and beverage taxes. . . . We have a long-standing policy of only taking positions on issues that impact our Company and industry."