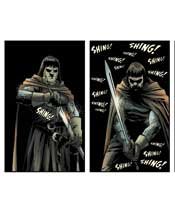 Lowe helps readers "hear" the story in "Hawks of Outremer," based on a Robert E. Howard story, published by Boom Studios.

Gloria's eyes grow bigger. Fear turns to defiance. Her face zooms in and out as Johnny Lowe's fingers deftly move across the screen of his iPad. His eyes shine.

Lowe, who lives in Clinton, has turned his passion for telling stories toward the field of comics. A local freelance proofreader and copy editor, Lowe also works as a comic-book letterer on one of the hottest titles in the comic business today, Image/Shadowline's "Morning Glories." He is also lettering issues of "Farscape," a series based on the popular sci-fi television show, for BOOM! Studios.

"I can do a book in about two days," Lowe says of "Morning Glories." He sets up a low resolution file on his computer that can be accessed quickly as he begins the work of taking Nick Spencer's script and converting it into the proper font, then sizing and placing the word balloons on the comic panels.

Born in Vicksburg, Lowe, 55, attended Northeast Louisiana University, graduating with a degree in radio and TV management in 1978. After graduation, life took him to Los Angeles where he worked his way into proofreading and copy editing for some of the largest advertising firms, including Toyota Motor Sales USA, Saatchi and Saatchi, and DGWB Advertising and Communications.

He returned to Mississippi in 2006 due to his father's health. "It was to be just for Christmas," Lowe says. He stayed. Since his return, he worked as a freelance copy editor and proofreader for the University Press of Mississippi and local advertising agencies. Currently, he is freelancing for GodwinGroup.

In the comic-book world, it is the writer's job to develop the story and write dialogue, like a movie script. The artist draws the black lines showing the story sans words--think of it as still shots from an old black-and-white silent movie. The colorist adds the array of colors and tones of light like the advent of Technicolor in films. The letterer's job is to bring to life the script. It is the words and the letters that shape the tone, action and inflection of the characters. The font size and style of a word all relate to the reader subconsciously the mood and feeling of what is happening.

One of the letterer's tasks is to cut the writer's dialogue into sections, drawing the reader into the story. The dialogue is placed in "word balloons" set within the artist's panel. In a movie, an actor can change volume to his voice, a sound engineer can soften some sounds and sharpen others. In comics it is the letterer's job through font and style to achieve those effects.

"If you're a good letterer," Lowe says, "then the reader won't notice it. "

Gloria, the main character of Lowe's Web comic, "Grounded Angel," is a teenage girl who grows heavenly wings. Her destiny is to battle demonic forces bent on driving Earth into a new age of darkness. Steve Horton developed the title, and Lowe soon took on writing duties, turning it into one of the online-comic medium's most popular titles. It was one of Lowe's earlier forays into the world of comics. Proudly, he shows an electronic page done in the black-and-white, Japanese style of graphic story telling called manga. The frames of the comic page consist of four equally sized drawings completely devoid of color covering the top half of what would be a page of a traditional printed manga comic. On the tablet screen, the evil force masquerading as Gloria's best friend, Jenn, berates her as it tries to weaken Gloria for the coming apocalyptic battle.

"See how these frames are all the same size?" Lowe asks. "I wanted her to look like she is dusting herself off and then ..." His fingers fly to the bottom of the frame where Gloria's white wings snap from her back spreading wide and radiating power. "RMMMBLE..."

"I should have made this the next page," he says wistfully as the picture expands filling the screen.

The online comic started at one page a week, but Lowe felt he needed to expand the dialog to keep readers returning. "Eventually, we got up to three pages a week to keep it on schedule," he says. "You can see when I took over, as I tend to be more long winded than Steve."

His fingers flip through the pages on the iPad. He relates a story of the problems of the sometimes-global nature of today's comic industry. He loves the work and style of the book's artist, Vivi Erlanita, who lives in Thailand. "English is not her first language," Lowe says, then settled in to tell another story.

In one scene he wrote, Gloria is fighting for her life, and the villain masquerading as a doctor injects her with a syringe full of poison. The artwork Erlanita sent showed the villain holding a Windex-style spray bottle. He went online and sent her a picture of a syringe and how it is used. Erlanita quickly changed the panel. Crisis averted. Lowe smiles. Story told.