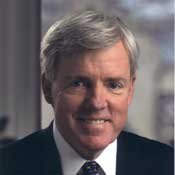 Jim Barksdale has offered money to help JPS hire a new superintendent if salary becomes a barrier to hiring the best candidate.

The district may get some financial help from Jim Barksdale, former president and CEO of Netscape. Barksdale has offered funds to help find and pay a new superintendent.

Board President Kisiah Nolan said she received a letter from Barksdale officially offering the board financial help last week, but needs clarification before discussing with the board.

JPS board member George Schimmel said last month that he thought the board would be receptive to Barksdale's assistance. He said JPS offers one of the higher salaries in the state, but he does not know how the district's pay compares to comparable cities in other states.

"To my knowledge (the district's salaries) haven't been a major difficulty," he said. "... On the other hand, it certainly could be an issue as we go forward."

The school board voted in September to form a Community Advisory Committee to get input on the superintendent search from key stakeholders in the district. JPS announced the committee members last month, and Nolan said the board plans to meet with them sometime this month.

Carol Burger, president and CEO of United Way of the Capital Area, is one of the committee members. She plans to host a series of meetings prior to the search process to get input from parents and other community leaders about what the board should look for in a new superintendent so she can take their concerns to the board.

Burger's top concern is the district's dropout rate, and she said traditional ways of keeping students in school will not work. "I think we've got to find somebody who's willing to come in and take risks and make changes," she said. "Our present system needs to be fixed, and it can't be fixed by the status quo."

I wish that there had been an effort to include more parents on this committee. We are on the frontline, with our boots on, fighting this battle everyday. Alot of these people are the status quo, business as usual. But I'm extremely hopeful that they will get it right this time. Heard Mr. Barksdale yesterday at the Technology Luncheon. I truly appreciate his candor and courage when speaking to his peers about public education, something that many of them don't care about yet if they only knew how important it is to educate all the children, not just some. "Everyone wants progress, no one wants change" Jim Barksdale

I know that quite a few of the committee members are asking for input from the community (including parents); for example, Parents for Public Schools has a survey up on their website: http://www.ppsjackson.org/ And, of course, there's always the opportunity for public comment at school board meetings, and I'm hoping there will be some community forums before all of this is over.