It's All Slipping From Reach 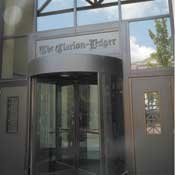 The Clarion-Ledger's huge building downtown now has even fewer employees.

The Clarion-Ledger is hiring a human-resources professional, the Gannett Co. website announced June 1. A cynical observer might assume this is an easy H.R. job, as it calls for someone to "coordinate recruitment and retention initiatives, training opportunities and maintain effective employee relations." With frozen positions and fewer people to retrain, one has to wonder what "effective employee relations" are left.

"This is a HR Generalist position that will be instrumental in facilitating an employee-oriented, high-performance workplace culture." That "culture" at Gannett-owned Clarion-Ledger resulted in at least 10 layoffs last week, and more than 700 throughout Gannett. (Some of them posting on independent Gannett Blog call it the 700 Club.)

Adding to the burn of lost jobs and insecure futures, any Gannett employee will tell you that the CEO of the company, Craig Dubow, just got his salary doubled to almost $5 million annually. "A big payday for the boss while handing out a blizzard of pink slips suggests that Gannett's corporate management is egregiously tone deaf," Gilbert Cranberg, a journalism professor at the University of Iowa, wrote on the Nieman Foundation website.

"Look, running Gannett Co. Inc. isn't easy these days, but it isn't the roughest thing in the world, and I haven't heard anything that makes these folks seem like they've got any kind of grasp on where to go in the splintered media age. And those salaries are awfully high for a company barely hanging on to its Fortune 500 status and dropping fast," Ryan Chittum wrote on the Columbia Journalism Review website.

In April, The Clarion-Ledger began clucking about its new feature: Deal Chicken, a national Gannett attempt to get in on the Groupon and LivingSocial model that offers huge deals to customers.

The Wall Street Journal explained the bigger picture: "The plan also calls for greater matching of hyperlocal community efforts tied to its TV broadcast stations as part of Gannett's rebranding campaign emphasizing itself as a traditional media company with a digital core." Many national and multi-national corporations sell themselves in local markets as a "hyperlocal" solution.

Back in March, Gannett launched the "It's All Within Reach" campaign with a new logo that no longer included the planetoid employees called the "deathstar." The news release said advertisers could get their message "right down to a targeted demographic, watching an ad in an elevator." Gannett rolled out the campaign, then announced the job cuts June 21.

"By shifting resources to local interactive marketing efforts, Gannett believes it can do more with less, especially as it becomes a different company," Dan Kaplan writes on PaidContent.org. "To be sure, digital does allow that. But the results, though still positive, will still take time to balance out the print losses, as digital represents 20 percent of all Gannett's revenues."

The Clarion-Ledger recently reported 40 layoffs at the Mississippi Department of Employment Security and averted layoffs at Jackson Public Schools, but did not report its own layoffs last week. Of the 10 people fired, at least four worked in the newsroom—and one was reportedly its Metromix editor.

Gannett Blog, an independent site that former USA Today business editor Jim Hopkins runs, featured The Clarion-Ledger several times this week. "Publisher Leslie Hurst established 10 strategic goals for her staff. Among them: 'Reconnect with our readers, advertisers and our communities, demonstrating that we haven't lost our community heart,'" Hopkins writes. "Indeed, only last week, Hurst directed her employees—shaken by a new round of layoffs—to seek consolation in a re-reading of those goals." In that memo, Hurst talked about RIFs, an acronym for "reduction in force" as a euphemism for fired people.

Hopkins said Hurst told employees at The Daily Advertiser in Lafayette, La.—a paper she headed before she came to The Clarion-Ledger in December—that "she would not speak to the public, would not answer emails, and if called would not pick up the phone. She also will not answer voice mails."