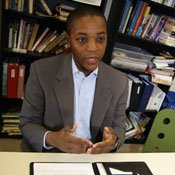 Marcus Ward is no longer running for the seat of Ward 1 on the Jackson City Council.

Marcus Ward, who announced his candidacy for Ward 1 city councilman last month, has decided to pull out of the Feb. 15 special election leaving only Quentin Whitwell in the running for the seat.

"After much prayer, deliberation and many conversations with my family, friends, neighbors and campaign committee, I have decided that I will not qualify as a candidate in the Special Election for the vacant Ward 1 Jackson City Council seat this year," Ward said in a statement yesterday. " I have been offered and accepted a promotion with my current employer on Friday, Jan. 21, 2011 that will not afford me the necessary time and attention to effectively run a competitive campaign and perform the duties of Jackson city councilman."

Whitwell, an attorney and lobbyist, is currently the only candidate who has submitted qualifying papers to the city clerk's office to run for the Ward 1 position vacated by Jeff Weill, who took his new Hinds County judge seat this month. Contenders have until 5 p.m. tomorrow to file.