State of the State: A Fact-Check 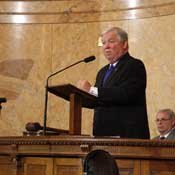 Gov. Haley Barbour used his final State of the State address, on Jan. 11, to tout his resume of accomplishments over two terms. Ever the savvy political communicator, the governor stretched the truth and papered over the more complicated reality. In other instances, his claims were outright wrong. Here's a selection of Barbour's claims and that truth behind them.

"While it took two-plus years, we got our budget back to where the state spent no more than it received in annual revenue, and we quit raiding balances in special funds. We replenished the Rainy Day Fund to its statutory limit of $375 million and created other reserves to cover potential federal liability. And we did it without raising anybody's taxes."

In a September 2010 assessment of the country's governors, the libertarian Cato Institute suggested that Barbour was not a small-government conservative, giving him a "C" on its "Fiscal Policy Report Card."

The report noted that Barbour has approved two tax increases during his tenure: a 2008 tax increase on hospitals to fund a Medicaid shortfall and a 2009 tax hike on cigarettes. The report also noted that state general-fund spending increased 43 percent between the 2004 and 2008 fiscal years. That span coincided with a surge in state sales-tax revenues following Hurricane Katrina, however.

"Governor Barbour has a conservative reputation, but his tax and spending record over seven years as governor has not been very conservative," study author Chris Edwards wrote.

"Starting that first year, we implemented significant, successful changes to spur the creation of more, higher-paying jobs for our people. … The results include a 27 percent increase in personal per capita income despite the recession. This is the 15th highest increase in the country over this six-year period."

"I'm pleased to tell you and the people of Mississippi that today our state Medicaid program is run with compassion and efficiency for its beneficiaries and their providers and for the people who pay for it: the taxpayers. The federal authorities reported last year that Mississippi's Medicaid error rate is 3.47 percent, the fourth lowest in the country. The national error rate is more than twice as high."

In 2009, Barbour touted Mississippi's low Medicaid error rates as vindication that his policy of requiring face-to-face meetings for all Medicaid applicants had reduced fraud.

The Center for Budget and Policy Priorities has argued that the "error rates" Barbour refers to, the federal Payment Error Rate Measurement program, do not necessarily demonstrate any improvement in Mississippi's Medicaid system.

"PERM does not measure fraud," CBPP's Sarah Lueck wrote in March 2009. "It is intended to examine how often states make mistakes in eligibility decisions and in paying medical claims."

Moreover, Lueck wrote, PERM is a flawed system and tends to overstate errors. Under the PERM system, even proper Medicaid claims could count as errors if service providers did not complete certain paperwork.

"Finally, we're optimistic that KiOR soon will be breaking ground in Columbus for its first biocrude refinery…"

MDA spokeswoman Sally Williams says that Texas-based biofuels startup KiOR has not yet secured a purchase agreement from a major refining company, one of the conditions for the company to receive the $75 million in state loans that legislators approved last year. However, KiOR is proceeding with construction on its Columbus production facility using its own funds, Williams said.