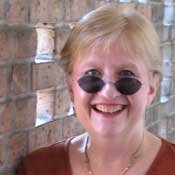 When I was 6 years old, the concept of zero made my brain hurt. "How can there be nothing?" I wailed in utter frustration. "Even when you take away all the apples and all the oranges, you still have the basket; you still have the air!"

And forget negative numbers. I have yet to find a practical application for why subtracting a negative number from a positive one results in a bigger positive number. Then again, maybe that's how the derivatives market works.

My dad, an engineer, thoroughly understood numbers; they seemed to speak to him in a secret language I will never understand. For every mathematical concept I struggled with, papa could explain it a half-dozen different ways. Not that his patience paid off for this girl--I was never so happy as the day I finished my last required math course.

Still, I have never accepted "that's just the way it is" as a reasonable explanation for anything. I want to know how things work and why the rules are the way they are. And while my intense need to know has confounded professors and pissed off bosses, it's also made me a tenacious researcher. Being a journalist means I can ask all of those annoying why questions with impunity. That freedom is a legacy of America's myth busting.

In the middle ages, western society ran on the myth that God personally anointed royalty (kings and queens and their ilk) to rule over the masses. To rebel against one's sovereign was not a political act; it was heretical and condemned you to hell. The prevailing secret language of the time, Latin (privy only to the educated few), ensured that the unwashed masses had to just believe.

Our Declaration of Independence loomed large in eliminating that mythical thinking, but it took a Revolutionary War or two to drive home the point.

America has a long, proud tradition of upsetting the status quo, but you have to make an effort these days to learn just how deep and broad our doggedness for equality has been. Mississippi had to pass a law to make sure its schools include the history and impact of the Civil Rights Movement, for example.

I was 13 when I showed up for my first anti-war rally, skipping school to hitchhike from suburbia to Washington, D.C., and the national mall along with thousands of others disgusted with a seemingly endless war that no one could give us a good reason to die for. A decade or two earlier, citizens had risen up in the South against the inhuman treatment of African Americans. Both movements cost people their lives and livelihoods, significant sacrifices for a better world.

I'm guessing that these days kids don't learn much about the labor movement, which forced businesses to provide safe workplaces and decent pay. Or the women's movement, which not only fought for suffrage, but the right to inherit property, to work and be paid the same as men, and to have a say over our bodies. Or the Native American movement, advocacy for the disabled, or the myriad other grassroots social movements that have provided a modicum of decency and civility to the lives of ordinary citizens--those not ordained by God to rule. No, those events aren't in the interest of the rich and powerful.

What we do hear about is the myth that the Tea Party movement has its roots in the American revolutionary tradition. Many people believe America stopped making sense long ago. They just want someone to make it all work again--in that lily-white "Father Knows Best" kind of way. Americans should be allowed to keep everything they earn, "like they used to," they proclaim, and government, illegal immigrants, welfare freeloaders and Muslims (in no particular order) are to blame for our problems.

Scratch just under the surface, though, and you'll find that pretenders usurped the tea party from day one: profit-driven, fast-talking hucksters like Glenn Beck; white supremacists like John Tanton of the Federation for American Immigration Reform; and enormous wealth like that of the Koch brothers empire. Like Jerry Falwell's Moral Majority of the late 1970s and 1980s, the Tea Party is no more a grass-roots citizens' movement than shopping at the Walmart in Flowood is shopping local.

That mythical '50s sit-com America never existed, either, any more than God handpicked Henry VIII to rule England in 1509. American people have fought hard for every right and every benefit of living in America. And those people, despite ubiquitous isolationist rhetoric, are made up of every nationality, ethnicity and religious persuasion.

People are scared. I get that. When cornered and forced to fight for its life, any animal can become dangerous. People want to believe in the American dream proffered by Madison Avenue. They don't understand why they're upside down in their mortgages, how a company they've worked hard for can simply no longer need them, or a country they've fought for can just hand money to "those" people.

They can't understand how Americans can elect a black man (much less one who they've been told is a foreign-born Muslim and a communist) with an un-American name like Barack and (God-forbid!) Hussein.

Yeah, I get it, but it's hard not to be condescending about people who believe the myths peddled by talk radio and the "party of no," who believe that moving backward is the right direction for America despite all evidence to the contrary. Life has never been easy for most people. As I watch Americans' energy being drained by cheap fear-mongering and paranoia-based politics, sometimes I just want to scream: "Wake up! They're lying to you!"

And then I take a deep cleansing breath. Adding my screeching will not help. And, ultimately, I think I would fight for their rights as hard as my own.

I'm digging in to the Tea Party like I dig into most things: I read books and articles, watch documentaries and talk with people. But most importantly, I follow the money. Unlike algebra, I find the language of Big Money easy to understand, with its motto of "I got mine. Screw you. Give me more." The people and organizations pushing the Tea Party rhetoric aren't on my side.

But maybe I've got it all wrong. Maybe Wall Street gives a damn about something other than profits. Maybe Tea Partiers aren't reacting out of fear and against their own best interests. Maybe it's really just another secret language, like math, that I don't understand.

The motivation for the Tea party seems to change depending upon where one finds themselves on the organizational chart. Those at the bottom tend to be idealists willing to pledge a blind loyalty to those at the top calling the shots. For the ones at the top, it is definitely an issue of money over ideology, or rather the manipulation of ideology as a means to control the money. It would be quite a stretch to believe that Rupert Murdoch, an Australian ex-pat, has any love for the US founding fathers yet he has profited handsomely from News Corps. exploitation of that narrative in the US. The Koch Brothers are a modern day continuation of the 19th century robber barons. While the railroads used Pinkerton thugs to control the people, today's robber barons use the 'for hire' media to influence the public opinion. Convince enough people that climate change is a myth, and it is much easier to ensure that your business interests are not annoyed by regulations meant to protect people or the environment.

For the ones at the top, it is definitely an issue of money over ideology, or rather the manipulation of ideology as a means to control the money. Well said, Jefferey. That's one of the things I found so distasteful about the Tea Party. The Koch brothers, especially, from what I've read, set the agenda to their advantage, then tell the American people the exact opposite. (e.g., "fight against corporate takeovers" bizarrely translates into "give businesses less regulations." Talk about propagandizing. They and their organizations (of which probably dozens exist) are masters at that game. It sounds like you've already Jane Mayer's "Covert Operations" printed in The New Yorker in August of last year. For those who haven't, click the link. It's an eye-opener and well worth reading. Be sure to read Adam Lynch's cover story this week, too.