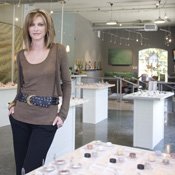 After her freshman year at Mississippi State University, self-made cosmetics guru Amy Head left school and worked odd jobs until starting her own business, Amy Head Studios, in September 1987. What started in a small two-room studio has now expanded into a retail cosmetics line, Amy Head Cosmetics, and three large studios in Ridgeland, Oxford and Birmingham that carry her line and Bonnie Holmes Skincare.

Head, 49, was born and reared in Mississippi, moving to Jackson at age 11. She has been married for 28 years to her husband, Harold Head, 56, and they have a daughter, MacKenzie, 17. Having family living nearby has kept her in Jackson, but it wasn't her only incentive for staying local. "I never aspired to be a high-fashion makeup artist; that was never any kind of motivation," Head says. "So if I'm not drawn to that, I'm not motivated to try and get to New York or L.A. I love helping the everyday woman and girl."

Head says that the colors in her American-made cosmetics set them apart from other brands. "I scrutinize over them so that the everyday woman can paint with them successfully," she says. "It's not designed for a pro makeup artist to paint with. It's something that anyone can be good with on their own face because the colors are natural on their own skin."

For the bride-to-be, Head advises flipping through magazines to find her "naturally glamorous" look. "Learn how to do your makeup for yourself, so that you can use this naturally glamorous piece of yourself on any occasion," she advises. "If the makeup looks natural, then you can use that makeup and those techniques all the time, not just your wedding day."

Amy Head's Top Five Wedding Beauty Tips
"All of these things, don't do them at the last minute," Head says. She suggests starting as soon as you're engaged.

• "Start taking care of your skin as soon as you know you're getting married, if you haven't been already," she says.

• "Be attentive to the eyebrows. The eyebrows have all the power over the beauty of the eye," Head explains. "If the eyebrows are not good-looking, then you'll miss the mark on the eyes being as beautiful as possible. "

• "Keep your immune system up. It's the most stressful time, and if you're not tending to your sleep and taking nutritional supplements then your skin looks terrible. It's broken out, and it's more from an internal reason, not a lack of skin care," she says.

• "Have super-white teeth. It's got nothing to do with makeup, but it makes a really big difference," she says.

• "If the money's available, take a look at hair color. Sometimes a bride can come across fresher, more vibrant with a touch of highlights," Head says.

Amy Head's Top Five Product Picks
• Amy Head Highlight Powder in golden luster or pink luster ($38) "It's a beautiful item to pop and reflect the light around the eyes and top of the cheekbones, which is hard to live without on a bride's face," Head says.

• Amy Head Eye Primer ($18) "Helps the eye shadow and eyeliner work stay in place for a long time, longevity is important," she says.

• Bonnie Holmes Mineral Skin Polish ($48) "To exfoliate the skin, it's divine," she says.

Amy Head Studio is located at 120 W. Jackson St., Suite B, Ridgeland. Amy Head Cosmetics are also available at Reed's Department Store in Tupelo, The Alluvian Spa in Greenwood and at http://www.amyhead.net.