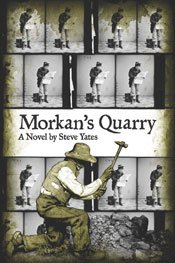 As he watches Confederate soldiers march into his war-torn town, quarry owner Michael Morkan turns to his son, Leighton, and says wearily "One doesn't have to fight in a war to be a part of it."

That statement sums up the spirit of Steve Yates' novel "Morkan's Quarry" (Moon City Press, 2010, $27.95). The story doesn't focus on presenting one army as right and the other wrong. Instead it tells the history of those whose lives were affected by the war—regardless of their involvement. All soldiers (save the few mercenaries) are Americans, any of whom could be a neighbor, family member or friend.

The plot follows two protagonists: Michael, a wizened quarry owner who wants nothing more than to protect his son and his business, and Leighton, his teenage son who has yet to fill the man-sized boots of his father's expectations. Living in Missouri, the two have enjoyed the advantage of being in a neutral state, but war has a way of finding those who want only peace. When a corrupt officer forces the elder Morkan into selling supplies to the Confederate army, the Union brands Morkan a traitor and imprisons him. Most of his story involves his experience in custody, while Leighton strikes out on a quest to rescue his father and save the family business.

While heroes and rogues of the war make occasional appearances, the story doesn't focus on them. Those fighting the war are merely a dynamic part of the bloody scenery that surrounds the true focus of the tale—the Missourians simply trying to live their lives. This approach should strike a poignant note and serve as a reminder that although our wars are now fought thousands of miles away, it does not mean that they don't alter lives and livelihoods daily—and rarely for the better. In a metaphor for our country, Leighton becomes a man through his war experiences—a strong and honorable man—but loses his innocence and zest in the process.

Yates knows the business of rock quarrying and weaves extensive details within the narrative. As the pages turn, one almost expects to stir up a cloud of lime dust. A native of Springfield, Mo., his descriptions of the majestic Ozarks were a bonus that made the story feel all the more real. While the story is 100 percent fiction (as the author reminds us), one has a hard time reading the book without being tempted to think of the tale as history. Be it the descriptions, the faithful depiction of 19th-century Ozark life, or even the classic layout and style of the book, "Morkan's Quarry" delivers an exciting and thought-provoking read.