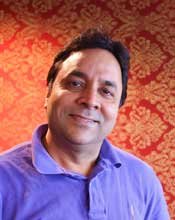 An Indian man with a medium build, dressed in a mauve polo shirt, khaki pants and a black apron, carries white napkins and silverware while he serves five customers in his restaurant. His soft brown eyes wear a warm smile. Parveen Kapoor, a native of Delhi, India, owns Bombay Bistro, which opened in December in Jackson.

This Jacksonian is putting a distinctive spin on traditional Indian eateries in Mississippi. "I want to make this a unique Indian restaurant where you get food, but it should be like Disneyland," he says.

Kapoor, 50, says he wants to incorporate entertainment into his restaurant, such as karaoke nights. "I want to think outside the box," he says.

A neighbor in Delhi introduced Kapoor to the restaurant business when he was a teenager and told him he could be successful. What began as a job opportunity ended up fueling Kapoor's passion.

The youngest of six took his first job as a waiter at the Maurya Sheraton Hotel in Delhi. He went on to earn a bachelor's in hotel and restaurant management from Delhi University.

After spending years working in Delhi, with a stint catering for the James Bond film "Octopussy" and a 13-year career at the Maharaja Indian Restaurant in Tokyo, Japan, life had become enjoyable but stressed. His children's school tuition was expensive, and he and his wife worked tirelessly.

"I realized I was turning 42, and I had to either change my job or go back to India or do something where I can see my future," he says. He decided to come to the United States and began applying for jobs.

Kapoor moved to Mississippi to work at Western Sizzlin Steak and More Restaurant in Canton in 2003.

He says when he first arrived in Jackson, he wasn't used to the slower pace, but he realized he was "missing the chirping of birds" and nature after years living in metropolitan cities.

"I can walk on grass without my shoes on. I can water my flowers out here. Doing business is pretty easy out here," he said.

After working at several restaurants in the metro area, Kapoor wanted his own restaurant. He opened a Quizno's in Brandon in 2008, but that wasn't enough. Having his own Indian restaurant was his ultimate dream.

"This was one thing I wanted to do before I (die)," Kapoor says.

The married father of two has now made Jackson his home, where, he says, he loves the people, and the plates of turnip greens and cornbread.

Thanks for the giving some attention to this wonderful person and his excellent restaurant.