Drink a Cup of Kindness 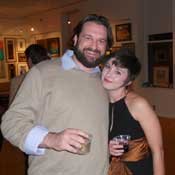 CORRECTION: We spelled sommelier wrong in an earlier edition of this story. We are sincerely sorry for the mistake and regret it.

This time of year is full of tradition and opportunities to celebrate. Some of my favorite annual holiday parties include my downtown friends, who have become like a family. I am constantly grateful for their love and friendship, but this year more than ever, spending time and celebrating with them has been important. And let's be honest: I also like any chance to dress up, socialize and enjoy some festive drinks. This season has provided no shortage of such opportunities.

My neighbors and I often joke that living downtown is akin to living at a dorm for 30-somethings, so of course we have an annual Christmas party. This year, we gathered with neighbors and friends of downtown at Gallery 119 (119 S. President St., 601-969-4091) to enjoy food, drink and each other's company. Everyone interpreted the holiday spirit in their attire in their own style. While I wore what are now known as my party pants—they're entirely sequined—from Red Square (1000 Highland Colony Parkway, 601-853-8960), some neighbors got creative and made earrings out of ornaments or found tacky vintage Christmas ties at a second-hand store.

Ultimately, though, we all knew that it was about the people, and as I cleaned up the remnants the next day, I couldn't help but be incredibly thankful for everyone there and the place that I call home.

'Tis the season, as they say, so the next week, it was time for yet another downtown holiday fete. My friends Matt Eichelberger, Ramel Cotton and PJ Lee recently formed a law firm, and they hosted a Christmas party on the balcony of the Electric 308 Building (308 E. Pearl St.). On an unseasonably warm Wednesday night, friends and colleagues gathered on the balcony and in the corporate unit. With music by Ben Payton, food by Lah Di Dah Inc. and bartender Tom Zuga from Hal & Mal's behind the bar, we celebrated our friends' new endeavor and the season in style.

In addition to Christmas parties, another recent tradition that toasts the season is Bravo! Italian Restaurant and Bar's (4500 Interstate 55 N., 601-982-8111) annual champagne tasting. Being a girl pretty much dictates that I enjoy bubbly, so when the man-friend suggested we attend, I eagerly agreed. I can't really think of a better way to spend a Sunday afternoon than tasting the different varieties sommelier Mitchell Earrey selected. Our favorite was the blanc de blanc. We stuck around for dinner, and Odiri Dafe—a favorite server—took great care of us.

And, of course, one of the biggest parties of the year is coming after that, the Best of Jackson party, a time to start the year off by celebrating all that's wonderful about this city I love.

Thank all of you for following along with me this year as I've shared my experiences at goings on in the city. I hope that I've shared some of this special place's energy and people in a way that has spoken to you in some way or encouraged you to try a new place, a new look or a new drink—and to appreciate all that Jackson has to offer. I know it's certainly done that for me.