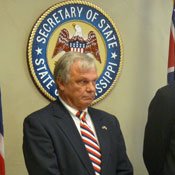 A ballot measure backed by the Mississippi Farm Bureau Federation President David Waide could be subject to legal challenge.

Mississippians will likely vote on restricting the use of eminent domain to procure private land only for public economic development projects next November. Supporters of a ballot initiative limiting eminent domain submitted more than 119,000 signatures in support of the measure to Secretary of State Delbert Hosemann this morning.

Pending approval from the secretary of state's office, the measure will read: "Should the government be prohibited from taking private property by eminent domain and then transferring it to other persons?"

The Mississippi Farm Bureau Federation President David Waide said started the signature-gathering effort began in April. The federation tried for the past three years to pass a similar bill in the Mississippi Legislature. In 2009, the state House of Representatives and Senate passed a bill, but Gov. Haley Barbour vetoed the measure, arguing that it "would do more damage to job creation and economic development than any government action since Mississippi rightfully began trying to balance agriculture with industry in 1935." In his veto message, Barbour said that the bill would prevent large-scale projects like the Nissan manufacturing plant in Canton while not preventing certain other uses of eminent domain, like redevelopment efforts by local governments and public utility projects by private companies.

"I don't see where it's going to affect economic development," Waide said.

The eminent domain measure is the 31st ballot initiative in state history and the third slated for the 2011 statewide election. Two other measures, one defining legal personhood at the moment of conception and another establishing a voter identification requirement, have already qualified for inclusion on next year's ballot.