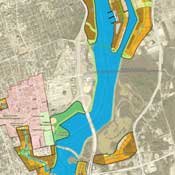 The U.S. Army Corps of Engineers told Mississippi congressional delegates this month that they will consider a lake plan for Jackson.

The U.S. Army Corps of Engineers has reversed itself on an earlier decision not to include a lake impoundment as part of a flood-control plan along the Pearl River. "The Corps is happy to consider a single-lake plan and other plans in a feasibility study, if the federal government provides funding for (the federal match)," U.S. Army Corps of Engineers spokesman Kavanaugh Breazeale told the Jackson Free Press this morning.

Jo-Ellen Darcy, assistant secretary of the Army Civil Works Division, sent a Sept. 17 letter to members of the Mississippi delegation, assuring them that the Corps was on board with studying a lone-lake plan.

"I have been advised by the U.S. Army Corps of Engineers that they will resume the Pearl River feasibility study, with inclusion of the locally preferred one-lake alternative, provided funds to continue the study are included in the Fiscal Year 2011 Energy and Water Development Appropriations Act," Darcy wrote, adding that study will begin "as expeditiously as possible" after the appropriation.

The letter arrives months after members of the Rankin-Hinds Levee Board voted to ask the state's political delegation, Sens. Thad Cochran and Roger Wicker and Reps. Bennie Thompson and Gregg Harper, to pressure the Corps, which previously advocated only for a levee expansion flood-control plan. The delegation sent a letter to Darcy in August, requesting the Corps continue an environmental-impact study and a third-party review of the single-lake plan, which is necessary before any flood-control project can move forward.

Corps Project Manager Doug Kamien argued last year that the Corps could not consider a flood-control plan containing a lake for the Pearl River between Hinds and Rankin counties as long as a less environmentally devastating plan was already available. Kamien told board members that a simple levee-expansion plan was the most environmentally friendly option.

Levee Board member Socrates Garrett told the Jackson Free Press at a recent public event this month that the lake project, as far the Corps went, was "already in the bag."*

"I've been told the delegation came through for us," said Garrett, a proponent of the lake plan.

The Corps terminated the flood-control study this year after members of the board fought for years over the potential size of a lake-plan project. Jackson representatives on the board, including members Leland Speed and Garrett, advocated for a massive two-lake plan big enough to engulf portions of LeFleur's Bluff Park, while other members of the board pushed for a smaller lake plan, or a simple levee-expansion plan to appeal to the Corps, for the sake of expediency.

*Editor's Note: Levee Board member Socrates Garrett claims he never used the term "already in the bag" when referencing the Mississippi congressional delegation's support for a lake as a method of flood control for the Pearl River as the JFP reported in the above story. Garrett disputed that quote this week, saying he said something more along the line of "legislators had gone to bat for us."

Note: I've appended an editor's note to this story, indicating that Socrates Garrett has disputed a quote in it.