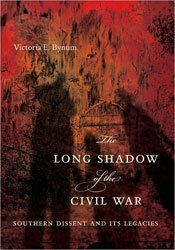 Courtesy Of U. of NC Press

The Civil War can be a tumultuous topic. Perhaps because it's the source of anguish for some and shame for others, southerners often avoid talking about it at all. The effects of the deadliest war for American soldiers and the decades that followed left an indelible mark on the societal landscape of Mississippi and other former Confederate states.

Victoria Bynum's new book, "The Long Shadow of the Civil War: Southern Dissent and Its Legacies," (University of North Carolina Press, 2010, $35) explores three regions where locals fought against the Confederacy: the Quaker Belt region of North Carolina; Big Thicket, Texas; and the Free State of Jones in the Piney Woods of Mississippi.

Bynum's erudite prose explores dozens of cases within these three regions, which typi- cally fall in the gaps of ordinary history books. These are the stories of southerners whose en- emy was the Confederacy, and Bynum paints their close-knit communities richly, as well as the politics and social movements of the time.

In each region, Bynum focuses on specific people. In Texas, it was Warren Collins; in North Carolina, Bill Owens; and in Mississippi, Newt Knight.

These three men helped organize groups of dissenters whose actions ranged from hid- ing out in the woods to killing Confederate of- ficers to raiding pro-Confederate homesteads. All of their tales are fascinating.

Bynum explores, too, the role of women in these anti-Confederate groups, such as the Knight Company of Mississippi:

"The Knight Company's most famous accomplice was Rachel Knight, a slave of Newt Knight's grandfather. Rachel was credited with using red pepper and ground glass to confound and kill militia hounds on the trail of deserters. After the war,she gave birth to several light-skinned children reputed to have been fathered by Newt."

Although Bynum discusses the "multiracial community that endures to this day" in Jones County, she makes sure to frame the narrative realistically, particularly in noting that the Knights were not outspoken abolitionists. Rather, this was simply the way they lived, astonishingly so for their era and geography.

Bynum depicts the other communities in equally intimate lights, grasping each one's complexity while providing an analysis that brings this history to modern relevance.