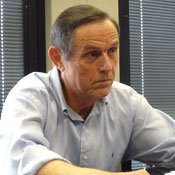 Republican governors in states including Mississippi and Nebraska may be using inflated cost figures for Medicaid in order to help a movement to roll back recent health-care reform.

"The governor's study done by Milliman Inc. is seriously flawed," Nelson wrote in August. He said the study says about 60,000 people who have private insurance now will automatically drop their insurance and apply for Medicaid.

"This is the most partisan behavior I've seen in modern times between Republicans and the (presidential) administration," said Rep. Steve Holland, D-Plantersville. "I don't expect anything less." He pointed to Gov. Haley Barbour's lawsuit against reform, adding that state Medicaid Director Robert Robinson is "Haley's high minion" and "a hatchet man against the poor people of Mississippi."

Division of Medicaid Deputy Lynda Dutton told legislators that she expected up to a $1.7 billion increase in state Medicaid expenditures, triggered by factors such as administrative costs related to reform for 2014.

The state's Medicaid enrollments between 2011 and 2014, thanks to expanded eligibility, could put 88,990 more children onto the rolls, and 140,948 adults and pregnant women, a Medicaid budget report stated. Medicaid officials also expect children qualifying for the federally matched Children's Health Insurance Program to increase by 840 kids to 68,000, while newly qualifying childless adults who make up to 133 percent above the federal poverty level ($29,327 for a family of four) will put 188,000 new beneficiaries upon Medicaid rolls when they qualify in 2014. The state currently has 691,677 individuals currently enrolled in Medicaid-related services, while Census figures show 20.8 percent of the population was below the poverty level in 2008.

Robinson said Milliman Inc. "included everybody and everything" and uncovered realistic costs to the state. "They are the largest firm in the world that does this, and we have a lot of confidence in what they're saying," Robinson said, adding that the increased enrollees are "going to cost us some money."

Nevertheless, the non-profit think tank Center on Budget and Policy Priorities criticizes Milliman for ignoring U.S. Census statistics showing that not everyone makes the switch to Medicaid if the option exists. "In the 12 states that have expanded Medicaid to cover adults with incomes at or above the poverty line, an average of 23 percent of individuals with incomes eligible for Medicaid have private coverage. In the states that haven't expanded Medicaid, a nearly identical share—22 percent—of the same population has private coverage," the center wrote in its June report "Medicaid Expansion in Health Reform not Likely to ‘Crowd Out' Private Insurance."

Citing a similar Milliman Inc. assessment for the state of Indiana, initiated by another Republican governor—Gov. Mitch Daniels—the Center on Budget and Policy Priorities claims the company's "cost estimates for Indiana would be 28 percent to 38 percent lower if the analysis assumed a (Medicaid) crowd-out rate that reflected consensus research," adding that "there is no means-tested program that achieves 100 percent participation, or close to it, among those who are eligible" for it.

Mississippi Health Advocacy Program Director Roy Mitchell said the federal government is paying for 100 percent of costs for covering newly eligible individuals through 2016. The federal government's reimbursement rate to states falls to 95 percent in 2017 and levels out to 90 percent coverage after 2019.

A May report by the Kaiser Commission on Medicaid and the Uninsured predicted that Mississippi will see an increase in Medicaid enrollment of 41.2 percent between 2014 and 2019, but that the state spending on that increase will only be 4.8 percent during that time. The federal government, meanwhile, will increase its own spending on the state for new enrollees by 37 percent.

Somebody should find out what Robert Robinson's dissertation from MSU contains. It should be on file at the MSU library. It might even be online.

Ben Nelson is probably the biggest DINO to ever hold a Senate seat so for him to come down so hard on Republicans, basically accussing the Governor of NE of being a criminal, makes this something people should sit up and take notice of. "Division of Medicaid Deputy Lynda Dutton told legislators that she expected up to a $1.7 billion increase in state Medicaid expenditures, triggered by factors such as administrative costs related to reform for 2014" "Mississippi Health Advocacy Program Director Roy Mitchell said the federal government is paying for 100 percent of costs for covering newly eligible individuals through 2016" Okay so the fed is covering 100% of costs to cover newly eligibles yet Ms. Dutton is telling the legislature to be prepared to dole out 1.7 billion over and above what would normally be dished out to her agency come 2014. Seems Ms. Dutton has not been made aware of Staple's "easy button" that supposedly saves people a bundle on things related to "administration" or she plans on giving herself and her staff one hell of a raise in 2014. Where is the Div. of Medicaid located? I'm going down there tomorrow to fill out an application for employment ASAP. Get me a piece of that 1.7 billion extra money since not one nickle will go to pay for actual medical coverage for Mississippians on Medicaid. Yehaw Ms. Dutton....SHOW ME THE MONEY!

The state’s Medicaid enrollments between 2011 and 2014, thanks to expanded eligibility, could put 88,990 more children onto the rolls, and 140,948 adults and pregnant women, a Medicaid budget report stated. Medicaid officials also expect children qualifying for the federally matched Children’s Health Insurance Program to increase by 840 kids to 68,000, while newly qualifying childless adults who make up to 133 percent above the federal poverty level ($29,327 for a family of four) will put 188,000 new beneficiaries upon Medicaid rolls when they qualify in 2014. Sooooo........almost half a million Mississippians not previously covered with health insurance will receive coverage in 2014 and Mississippi does not have to pay one cent for it. Mississippi will only have to pay a maximum of 10 percent towards this coverage when it is fully implemented in 2018. Oh yeah Haley, your lawsuit filed to stop this hemmorrhaging of human compassion is completely warranted. The audacity of the federal government to help poor Mississippians live a heathier higher quality of life while getting away with paying only 90 percent of the cost. Sue those bastards STAT. It's against my constitutional rights for the government to try to help me afford health insurance. I WANT MY SICK COUNTRY BACK.

Think of the desperate straits Mississippi would be in if it did not receive federal funding for Medicare and Medicaid. I love Mississippi, but it is the fattest, poorest state in the country. Providing medical benefits to needy children and pregnant women is such a dastardly abuse of power, isn't it?

Yeah give all the righteous Puritans their way and they say don't even think about aborting that child. However, if the child is born with a hole in it's heart and denied coverage for the rest of it's life due to a pre-existing condition then tough sh*t. If you do find an insurer willing to cover your kid at a cost of 5k a month in premiums and a 100k deductible with a lifetime limit of 1 million you best go get yourself one of those high paying MS jobs because MS doesn't do Obamacare even if it takes civil war II to settle it. We're itching to avenge that loss anyway and this will be a great excuse to getherdone. Hmmm I wonder who might be the President of the Confederacy this go round? Colonel Reb or Colonel Haley. I vote for Colonel Reb because at least he is color blind, in one eye anyway. lol And the naive MSM thinks Haley is pondering running for the President of the "United" States. Stupid libs

What's funny is the federal government has been providing 3 to 1 federal match dollars for Medicaid for about the past five years already. All these people screaming about it? The state has been paying ONLY 1/3 of its costs for the past half decade and people had NO IDEA. Medicaid would have eaten us out of house and home a hell of a long time ago if we didn't have federal match dollars (that Bush put into place and have remained since). The state simply had to pay the "match". One dollar for every three. Once again, my mantra, got nothing to do with "Obamacare". I'm interested in the "assumption" of full participation. First of all, when CHIPS came about there was NO immediate jumping on that bandwagon. In fact, a lot of families that qualified for CHIP didnt know it existed. Eventually, there was a large PR campaign around it. The social services world (spearheaded by the Children's Defense Fund) got involved and were encouraged to do "sweeps" of households, the medical mall, lower income neighborhood meetings, etc, in order to enroll eligible children. THIS is what actually increased CHIPS participation. So, Robinson's "assumption" of full participation is ludicrous. Its just not going to happen. I also find it interesting that although they are allowing for less than a thirty percent increase in Medicaid beneficiaries, they are projecting an over 100% increase in the budget. How does that add up? If around 700,000 people currently cost us about $795 million, how does adding less than 200,000 to the rolls increase the budget to 1.7 billion? If someone can explain that to me in a way that makes sense, let me know. By the way, people who have private insurance coverage plus Medicaid get denied their Medicaid claims because Medicaid always insists that the private insurance company (if its a service for which they pay) be billed first (doesn't matter if the private insurance denies the claim based upon "pre-existing condition"). Medicaid doesn't care. They will still deny based on "other coverage". This is an issue for tons of families that have disabled children who work, are covered by private insurance, but also receive Medicaid for their disabled children due to the astronomical costs they would incur if they did not. So, people qualifying or carrying private insurance who also qualify for Medicaid are almost a moot point. Medicaid usually won't pay out their claims. If they do, they insist that private insurance pay their share first and they will adjust accordingly.(I know this from approximately 5 years of billing Medicaid for my services)