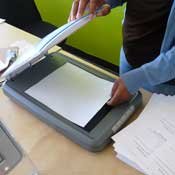 A pilot program that has increased online access to Madison County's courts could be coming to Hinds County.

A dash of transparency could be coming to Hinds County's court system in 2011 along with some newly elected judges. Mississippi Electronic Courts, a pilot program offering attorneys and members of the public online access to court filings, is on track to become available statewide at the beginning of next year.

The MEC program started in 2005 when the state Supreme Court began planning for a statewide system to reduce paper records and increase efficiency by allowing electronic filing in county courts. The state's effort got a boost in September 2006, when the Administrative Office of United States Courts awarded the state $640,320 to implement a version of the e-filing system used in the federal court system.

The federal system allows users—attorneys and members of the public—to search for cases in district court by party or attorney name, track activity on specific cases, and download motions and orders. The system is far more accessible than the status quo in Hinds County and most other counties not part of MEC. To get the same information in Hinds County, a member of the general public must go to chancery or circuit court at the relevant clerk's office, use a dated computer database to search for case numbers, retrieve paper case files and then photocopy the relevant documents at a cost of up to 50 cents per page.

MEC picked three counties—Madison, Warren and Scott—to adopt the federal system on a pilot basis, assess the costs of running it and work out any kinks in applying it to the different practices of state court.

Madison County Chancery Clerk Arthur Johnston said that differences in the federal and state court system have required tweaks to the MEC system, especially in the way it notifies judges of various deadlines in cases.

"They create different timelines and the need for different triggers," Johnson said. "There's all sorts of little bells and whistles that the federal system uses that are very helpful to help judges monitor their docket and control their docket."

Madison County courts tested the program internally for a year and a half before launching it publicly in 2008. In July 2009, the county made e-filing mandatory and, at the beginning of this year, the county abandoned paper records altogether. Johnson said that the program has made lawyers happy, as it gives them more time to file motions, and made his office more efficient.

"Folks are real happy they don't have to come to the courthouse to get records," Johnston said. "From our perspective, we love to see folks here in the office and love to talk to folks on the phone—I have to run for re-election every four years—but it does cut down on our staff workload. We're not having to answer the phone and pull this information up for folks. It's certainly economically viable for us to be able to use those folks to do more substantive things in the office. It does reduce staff time and staff costs by putting this stuff out on the Web."

The Mississippi Legislature funded MEC by approving a $10 filing fee on all new cases filed in circuit and chancery courts across the state. The state system will also charge a fee for viewing or downloading documents similar to the federal system.

Calvin Ransfer, program director for MEC, says that the system's pilot programs have proven that the fees can support system maintenance. The monthly cost of operating MEC is roughly $1,000 per court. It helps, Ransfer adds, that the system will handle maintenance and data storage for any participating county, meaning that counties only need basic Internet access, computers and scanners to adopt MEC.