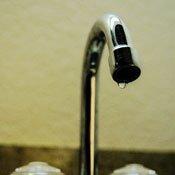 The standoff between the city of Jackson and members of the State Bond Commission over $6 million in interest-free loans for city water infrastructure repairs seemingly has ended.

"As I mentioned to you in our conversation earlier today, the Bond Commission unanimously adopted a motion by Treasurer Tate Reeves to confirm the commission's intent to approve a $6 million loan for the city of Jackson water project at its October meeting," Barbour stated in a Sept. 10 letter to Jackson Mayor Harvey Johnson Jr.

City spokesman Chris Mims said he believed the city of Jackson may have access to the money as early as October: "The city is very pleased that we were able to access the $6 million, and we're pleased that the governor and the mayor were able to have conversations that lead to this resolution."

The State Department of Finance and Administration said in August the city did not complete the loan application, which the Legislature approved last session. As a result, the State Bond Commission did not address the loan during its July 12 meeting.

Johnson said then that the city had already budgeted for the $6 million in interest-free loans to finance much-needed water and sewer repairs around the city and would likely have to re-configure its budget to include new interest rates to counter the delay.

Barbour sent an August letter to Johnson suggesting the city make use of the state's Revolving Fund loan program to finance the water-line work. Johnson replied that the city will make use of the SRF loan but needed to consider available sources for more than $200 million in needed water and sewer work.

"The Legislature's intention in establishing this no-interest loan was to immediately fund improvements around the capitol complex in order to minimize the level of disruption of state government that was experienced in January of this year," Johnson said. "Additionally, this no-interest loan certainly helps reduce the long term debt that future generations will have to face and expands the city's borrowing authority."

Barbour told Johnson in his letter that since the bonds will not be issued until next year, the state will need to continue working with the city "regarding a satisfactory payment schedule between the city and the state" and had asked his staff to set up a meeting this week with Johnson's staff, as well as representatives of the Department of Environmental Quality and the Mississippi Development Authority and the state Health Department.

The absence of the city's bond project from the July agenda caused controversy in August, as pro-city legislators squared off against State Treasurer Tate Reeves for demanding more information from the city before allowing the item onto the agenda.

Reeves told the JFP last month the commission's July 12 decision not to consider the $6 million interest-free bond proposal is a testament to the state's continuing effort to reduce its debt, and he described the process of bond beneficiaries sitting down with his office prior to the bond vote as "pretty standard procedure" under his administration.

"In the first four years the governor and I were in office, we had less debt on the books at the end of that four-year period than we had in the beginning. ... We didn't do that by running around, chasing people and begging them to take money," Reeves said.

Reeves also told The Clarion-Ledger the city must defend the bond request before the commission. Reeves said he needed answers to questions including "How (does the city) plan to fund other improvements that have largely been ignored for many years?" and "is federal money available to help fund some of these enhancements?" if so, "has the city been diligent in ensuring all federal sources were applied for and deadlines met?" among others."

Legislators who approved the $6 million bond inserted language in Section 44 of House Bill 1701 specifying that the bond money must go to city projects near state-owned or operated buildings or roads. It also stipulates that the city submit "an application to the (Mississippi Development Authority)" and that "the application must include a description of the purpose for which assistance is requested, the amount of assistance requested and any other information required by the MDA," not the state treasurer.

Rep. Cecil Brown, D-Jackson, took issue with what he perceived as Reeves "veto authority" by not including it in the agenda.

"The bill is very specific about the steps that MDA must go through, and also very clear that MDA is the authority, not Tate Reeves, not the Bond Commission. So Tate Reeves speaking on behalf saying he wasn't given the information—there's nothing in this bill that gives him the authority to even ask for the information," Brown said.

The JFP reported last month that the 2010 bond legislation did not require any other city to submit a bond "application."