‘Tell Me a Story' 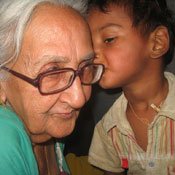 I was born into a family of storytellers. Both sides, though they couldn't be more diverse—one rural Minnesota farmers of Swiss-German descent, and the other Mexican-Americans that hopped between Texas, Europe and the East Coast, finally settling in the Midwest—have been recounting their vibrant familial tales since I was still in the womb.

"It will be a Herrera baby!" Abuela Juanita would exclaim with one hand on my mother's pregnant belly, the other wildly gesticulating while telling stories about the clan of niños who lived in North-Central Mexico—eyes as green as 7UP bottles, and a blue lineage that stretched all the way back to France and Spain. I know this, of course, because my grandmother told me the same stories, many times over, as soon as I was old enough to help her roll masa de harina into little balls that would later become flour tortillas at dinner. Which is to say, I was barely old enough to walk.

I was blessed with amber-hazel eyes just like my mother's. But Abuelita was happy enough with my black hair, olive complexion and Iberian nose and never stopped reminding me of how this made me Mexican; with tales linking our shared physical traits to a European aristocracy.

My maternal grandfather—never at a loss for words—would park his robust frame at the gold-flecked Formica table in the Deters farmhouse kitchen every evening and commence weaving yarns laced with the mischievous Scandinavian trolls and gnomes of his own midwestern childhood. With a twinkle in his eye and an endless array of characters, Grandpa Lloyd could captivate a room full of squirmy children in minutes. Fortunately, his penchant for storytelling didn't die when he left us 10 years ago: He passed his talents on to my mother and uncle Allen, both avid writers who share his love of narration.

"Tell me a story" is all I ever had to say. And whether I was roasting marshmallows around a campfire on a warm Minnesota summer night or cuddled into an overstuffed couch with three other cousins, someone was always happy to oblige.

Anthropologists consider storytelling one of the fundamental components of the human condition. The ancient practice is, in fact, ubiquitous among cultures the world over. One could say that as humans, we are innate storytellers—already equipped with the tools and desire to share our histories through the most colorful form of communication.

The oldest forms of narrative were transmitted orally, and came in the form of parables, fairy tales and fables. Generally used to validate and instruct individuals on societal norms and religious beliefs, they often ended with a moral lesson. Some researchers believe that such cautionary tales might tap into the collective unconscious, as defined by psychiatrist Carl Jung, where archetypes can evoke strong emotional responses.

But story has also served as a respite and could well be regarded as one of the earliest forms of entertainment. More importantly, narrative plays a significant psychological role in shaping our personal and cultural identities, aids us in the process of constructing memories and helps us attach meaning to them. It is because of these unique functions that personal narrative has the power to bring us closer to understanding our place in the world. Not only as individuals, but also as humans connected to something much larger than ourselves: culture.

Our family's personal narratives and mythologies are wellsprings of information. They provide the chief mode by which families pass on their experiences to subsequent generations and harbor their distinctive perspectives of the world.

Regrettably, sociocultural globalization has resulted in the loss of many such practices. Where children once learned about important cultural factors through stories told by their elders, Westernized acculturation has led to the leveling, and sometimes even the disappearance, of these customs. It is, then, our responsibility to keep these stories alive.

Preservation of personal narrative can be as easy as sitting down to have a conversation. With the rise of popular programs such as NPR's StoryCorps and emerging user-friendly technologies (yes, there's an iPhone app for that), more people are becoming interested in recording their family members' history through a one-on-one interview process.

Not having the luxury of frequent contact (or Spanish proficiency) with my extended family in Mexico, I decided years ago to interview my Abuela about her childhood, so that her stories wouldn't quietly die off like so many often do. It being 1998, however, and with much less technology available, I wasn't actually able to record the interview. I sat and wrote down her words with a pen and paper instead.

For more than an hour, I frantically jotted every lively phrase she uttered, or at least attempted to. I tried to refrain from too much interference—asking only open-ended questions, leaving the bulk of the narrating up to her.

What I ended up with were some incredible stories about her experiences growing up Mexican and her life as a first-generation American immigrant. I managed to misplace that notebook at some point during my numerous moves around the country and abroad. No matter—her stories will stay in my heart and mind for as long as I can remember them, and will forever shape my picture of the woman she was.

One day, I will tell my own children about the niños with the eyes as green as 7UP bottles, whose blue lineage runs all the way back to France and Spain. And in doing so, also pass along the gift of story; preserving just a tiny piece of what makes my familia so unique.

Corps [Story] Collectors
StoryCorps, one of the largest oral-history projects of its kind, has collected and archived more than 30,000 interviews from more than 60,000 participants since 2003. You can catch broadcasts of recordings every week on NPR's "Morning Edition," or log online to storycorps.org to search the archives. You can even download a free StoryCorps app for your iPhone or iPod (devices with recording capabilities work best) that provides users with a question generator and offers tutorials on best practices for interviewing.

Not All Created Equal
When it comes to interviewing someone, you don't want to take up all their time by asking too many or the wrong questions. Try not to ask questions that can be answered with a "yes" or "no." Rather, make open-ended inquiries for the greatest breadth of responses.

Take some time to consider what you're interested in learning about the person you'll be interviewing. Perhaps you're interested in a specific story from their childhood or want to know about their adult years spent in a certain profession or locale. Or perhaps you'd rather find out their feelings pertaining to a specific topic. The questions that elicit the most emotional responses are often times the ones we learn most from.