Controversial Ordinances Back in Committee 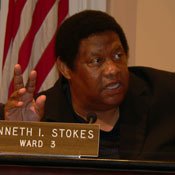 Ward 3 Councilman Kenneth Stokes said he plans to resign from City Council to serve as Hinds County Supervisor for District 5.

The Jackson City Council failed to approve two controversial ordinance changes this morning, despite overall favorability for the ordinances among a majority of the council.

Deputy City Attorney James Anderson advised the council to withhold a vote on an ordinance restricting city police officers from inquiring about resident status during public interactions, because the council failed to properly approve changes in the ordinance during an August committee meeting.

The council also failed to pass an ordinance imposing a 10 p.m. to 6 a.m. curfew on minors, which expired in 2009. The council still had no answer for concerns voiced by Jackson Police Chief Rebecca Coleman that police had no place to take curfew violators who are "status offenders," meaning they have committed no crime beyond violating the curfew.

"If we pick them up and they have committed no violation other than the curfew, and my people can't reach either of the child's parents or guardian we have no place to put them because the detention center will not take them--but that's where the ordinance says we have to take them," Coleman told the Jackson Free Press.

Ward 3 Councilman Kenneth Stokes pressed for passage of the ordinance regardless of holes, arguing that "there are very few offenders" who will be a problem, since police can reach most parents, but Ward 6 Councilman Tony Yarber countered that voters "don't want to learn weeks later" that the city council passed an ordinance that won't work.

Council President Frank Bluntson called a motion for a vote, despite the inherent flaws of the ordinance, but the ordinance failed with four members of the council in opposition. Ward 2 Councilman Chokwe Lumumba then offered a motion to reconsider the ordinance at a later date in hopes that the council could iron out the issue with status offenders.

His motion passed with a 6-to-1 vote in favor, assuring that the council will revisit the ordinance soon.