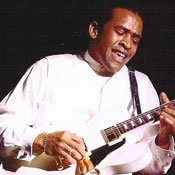 Bluesman Eddie Cotton Jr. grew up with gospel music in his daddy's Clinton church, Christ Chapel True Gospel Church of God In Christ, where he's known to sit at the Hammond B-3 organ as the church's music minister. Cotton was 4 when he picked up his first guitar.

"If it wasn't for my dad, I wouldn't know anything about music," Cotton told the Jackson Free Press a few years ago.

His minister father encouraged Cotton's musical interests, buying him any instrument he wanted to play, and making sure he had lessons with folks like Sherman Lee Dillon and Bob Etta. Cotton also found inspiration in traditional blues masters like Little Milton, Howlin' Wolf, and Muddy Waters, and soul singers like O.V. Wright, Little Willie John, and Otis Redding.

On stage, it's Cotton's soulful voice, his dynamic guitar and energetic stage presence that has made him a local favorite, his rhythms bringing out the dancers at every gig. He studied music theory at Jackson State University, but left in 1995 to launch his music career at Jackson venues like the now-defunct Subway Lounge and the Alamo Theatre on Farish Street, first in King Edward's band and then starting his own group.

At 39, Eddie Cotton has cut three albums: "Mississippi Cotton Club" in 1998, "Live at the Alamo Theatre" in 2000 and "Extra" in 2002. He's also appeared in the documentary "Last of the Mississippi Jukes" and made an appearance as Robert Johnson in the short film "Stop Breakin' Down."

This Saturday, Cotton performs at the 32nd annual Farish Street Festival on the main stage at 10:15 p.m. just before headliners Sugarfoot's Ohio Players. Other opening acts on the main stage include 601 at 7:30 p.m., Zac Harmon at 8:15 p.m. and Cupid at 9:15 p.m. The festival also features a gospel stage kicking off at 4 p.m. with Homegrown Live, Dynamic Golden Stars and DaMinista. Tickets are $10 in advance (at all Bebop locations, Bully's Soul Food Restaurant and Bama Record shop on Bailey Avenue) or $15 at the gate. For more information, visit the Farish Street Festival website.