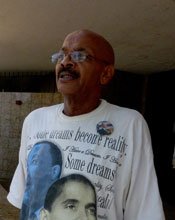 Photographs and newspaper clippings from the civil-rights era surround Dr. Gene Young as he tries to remember just how many times police have shackled him in handcuffs. One side of his T-shirt bears a portrait of Dr. Martin Luther King Jr. and the other side, President Barack Obama. He pauses and chews on a toothpick.

"I stopped counting how many times I've been arrested," the 60-year-old admits.

In 1963 at age 12, Young accompanied his brother to protest police who were arresting Freedom Riders at Jackson's bus station.

Police arrested Young, who was a bystander, and took him to the state fairgrounds where he was locked in a livestock compound and forced to sleep on a concrete floor for three days.

While too young to realize it then, this was the beginning of his career as a civil-rights activist. A few days after the event, NAACP Field Secretary Jerome Smith convinced Young's parents to send their son to New York City and Washington, D.C., to share his story.

"Years later, I asked my mother, 'Weren't you scared to let me go to New York at that time?'" Young recalls. "She said: 'Let's just say I kept your insurance paid.'"

The next year, while Young was attending a civil-rights convention in Kansas City, a barber at the hotel's barbershop refused to give him a haircut. Young and other NAACP members called the press and protested outside the shop, and the barber finally conceded. A photograph of Young getting his haircut appeared in Time Magazine.

Young graduated from Lanier High School and in 1972, from Jackson State University. He received a full scholarship to the University of Connecticut where he earned his master's degree and doctoral degree in higher education in administration in 1982.

Young was also arrested in 1974 for staging a protest in the University of Connecticut's library against the school's curriculum, which taught genetic inferiority.

After working as director of black studies at Bradley University in Peoria, Ill., for six years, Young moved back to Mississippi where he worked as an administrator at JSU until his retirement last year.

"I can deal with racial injustice, but I just couldn't deal with cold weather," Young says about his decision to return to Mississippi.

But then, Young becomes serious and paraphrases one of Evers' last speeches.

"He looked forward to the day when people heard the word Mississippi, and we didn't have to hang our heads in shame expecting the worst, but hold our heads up with pride expecting the best. We have come a long ways, and we still have a way to go. ... (But) having grown up here and seeing what Jackson was like, and where it is now, we've come leaps and bounds."