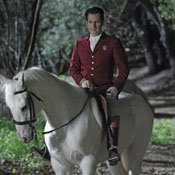 The fictional world of Sookie Stackhouse is a chaotic, bizarre, and dangerous place filled with vampires, werewolves and fairies. Sookie, the protagonist in the Southern Vampire Series and the Emmy Award-winning HBO drama "True Blood," is a telepathic waitress who falls in love with Bill Compton, a 173-year-old vampire. The story is set in the modern-day small town of Bon Temps, La., where, after the Japanese develop synthetic blood, vampires live and work out in the open, no longer in the shadows.

The creative force behind the story is author and Tunica, Miss., native Charlaine Harris who released the 10th book of the vampire series, "Dead in the Family" (Ace Hardcover, 2010, $29.95), last May and a collection of short stories, "Death's Excellent Vacation" (Ace Hardcover, 2010, $24.95) released
Aug. 3 that includes the tale "Two Blondes" with characters Sookie and vampire Pam. The third season of "True Blood" debuted this summer. Based on Harris' books, Alan Ball, the show's creator and producer, has taken her world and turned it into a bloody, sexual ravishment––not for the squeamish or faint of heart.

This season introduced Russell Edgington, the vampire king of Mississippi, played by Tony Award-winning actor Denis O'Hare. The king is the oldest vampire alive, somewhere between 2,700 and 2,800 years old. The third installment of the show is based on the third book in the series, "Club Dead," with Jackson as its backdrop.

In the book Edgington appears to be a 20-something with a more demure presence, but not so on "True Blood."

"Russell is a lot more powerful (on screen) than he is in the books. He's a lot more deadly, and he's an older guy," O'Hare says. "We're playing him as fairly powerful, menacing, physically imposing—I'm not that tall, 5 foot 8, but I can act big."

The opportunity to play the character came while O'Hare was shooting a film in Budapest. "I got a call from New York from my agent asking me if I wanted to be a vampire king in ‘True Blood.' I paused, and I said, ‘Well yeah.' I was delighted and called my boyfriend immediately, because he's a huge fan of the show, and he almost fell out of his chair."

He and his boyfriend, Hugo, live in Brooklyn, N.Y., with their Shiba Inu dog, Cleopatra, and both were fans of the show. "I just loved it. Just like anybody else, I looked forward to Sunday nights. ... The books are very, very enjoyable. I read about four of them, trying to find my character," O'Hare says.

As a stage actor, O'Hare was used to doing research on characters he took on, and as a student of Roman, Greek and medieval history, he had a lot to draw from to help define Russell. "I didn't quite know how old Russell was going to be ... I was focusing on Charlemagne and the Middle Ages," he said. "But then I found out he was older. ... He's a Celt, a druid, a pagan, and he's from the old Celtic region of the Carpathian Mountains."

O'Hare explained that Russell's roots connect him to the earth. "Like all these characters, these people are more complicated than they seem. ... He's got this incredible bond with nature. Many times in the season, he articulates his frustration and rage that the earth is being abused, and that the humans are not good stewards of the earth. I just find it interesting that even in a show like True Blood, you get some interesting politics coming through."

Although shooting took place in L.A., O'Hare spent some time in Mississippi.

"Hugo and I spent the night in Jackson and kind of looked around the next day ... saw the sights. We went to that amazing Walker's Drive-In. That was some of the best food I've had in a long time. I was really impressed, very nice people. ... The place they are using for (Russell's) house is an actual plantation called the Longwood Plantation. So we went down to Natchez and spent the day there and walked around Longwood," he says.

"True Blood" hit the airwaves in 2008 and has been rising in popularity ever since. Ball, who had already enjoyed immense success with HBO's "Six Feet Under," picked up the first book in the series on an impulse and couldn't put it down. He went on to read all the books in the series.

"Charlaine Harris has created a rich world filled with unique characters, a world that's as terrifying as it is hilarious, as well as sexy, generous and profound," Ball said in a statement. "I'm humbled she put her trust in me and I look forward to bringing her vision to television."

Harris, who lives in Arkansas with her family, grew up in the Delta and wanted to be a writer since grade school. Her world of the supernatural is detailed and logical.

"I try to blend traditions about such creatures with what will work in the book and what I think will be more interesting," she says about researching her books. This is evident even in her choice of character names: "My grandmother's best friend was named Sookie. It's a really old southern nickname."

One would think that the graphic nature of the content would draw negative reaction due to Harris' affiliation with the church. But Harris says that isn't the case.

"I haven't had any negatives comments, which is surprising and kind of wonderful," she says. "The show is a lot more graphic than the books, so I think I've come off well in comparison. The books seem so mild, if you've seen the show. I think it's unrealistic to write a book without any sexual content in it because people do have sex lives. And the book is about a young woman who is learning a lot about herself in all kinds of ways, including sexual."

Her husband and three adult children are hugely supportive of Harris' work. "(My son) reads all my books, but he doesn't say anything about them. And the others are really proud because of the reflective coolness of the show. All their friends watch the show, even the friends that don't read the books. So that gets me lots of cool points," she says.

People root for Sookie Stackhouse—readers hate to see her suffer and are elated when she takes a licking and keeps on ticking, like the proverbial Timex watch. The books provide a refuge for readers, allowing them to live vicariously through the characters.

"I, personally, think that my books are an escape from some of the sadness of everyday life or the boredoms," Harris says. "I can't count how many people have written to me saying that my books helped them get through a very bad time in their life."

But the books are not just for entertainment. Asked if there was an underlying message having to do with the acceptance of minority groups, Harris says: "Sure, I purposely did that. I always have an agenda with my books. There's always something I'm trying to say beside the plot. ... That's what I was thinking about when I started this series."

I hate True Blood and can't understand why women are so in love with the show. I think two of the main character got married yesterday. I bet if a few men started to going around town sucking the blood out of women, women would call the police faster than OJ can jump out the bushes. I also can't get with men changing to and from dogs. I thought women hated men with dog in them. I guess it's true that women are like Niagara Falls, pretty to look at, but if you get too close, you'll likely lose you life, sense of purpose, worth and sanity. Crazy, crazy for feeling....

I think True Blood is okay - but HBO makes some pretty good shows and documentaries. Loved The Wire, Treme and Deadwood (they were killing me with all the cussing! lol!!) - looking forward to the new series Boardwalk Empire. Have to add IF GOD IS WILLING AND DA CREEK DON'T RISE was excellent last night!