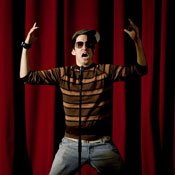 Charles Jackson, CEO of New Orleans-based comedy booking agency Jack's Entertainment Group, says stand-up comedy is "the hardest craft in the entertainment business because you have no back-up when you are on stage performing alone." And without a comedy club in Jackson, many local comedians don't have an audience to back them up, either.

Jackson hopes to change that with Jackson's First Annual Comedy Competition. Beginning Aug. 10, the contest will run for four consecutive Tuesdays at Dreamz Jxn, pitting amateur comedians from around the southeast against each other in a stand-up comedy tournament.

Those who make it to the finals will compete for $1,000 in cash prizes to be awarded among the top three finishers. Beyond the money, however, lies opportunity: Jack's Entertainment will offer top finishers a representation contract, giving them the chance to perform professionally.

Comedy is about more than simply performing in clubs, according to the promoter. Minding his personal motto, "Laugh your way through the crisis," Jackson sees comedy as therapy. He cites comedians performing for recovering cancer patients as an example of comedy's healing powers.

"You have to laugh," Jackson says. "Humor cures a lot of ailments."

Ultimately, Jackson wants to bring his vision to the city and open a comedy club in the Jackson. He hopes the competition piques interest in the local stand-up scene.

"We're taking all comers," he says.

Jackson's First Annual Comedy Competition begins at 8 p.m. Aug.10 at Dreamz Jxn (426 W. Capitol St.) and is open to anyone over age 18. Competitors pay a one-time entry fee of $25 and are expected to bring five guests to each round and give a four-week commitment to the competition. Call Charles Jackson at 386-338-8398 for further details. The cover charge for the competition is $7.