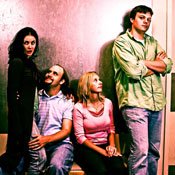 Two men awkwardly circle each other in the dimly lit fellowship hall of Broadmeadow Baptist Church in Fondren. The two men glare at each other angrily, the tension palpable. Suddenly, Phillip, the more physically intimidating of the two, steps up and confronts Adam.

"I just hope the next time we pass each other, I recognize who the hell you are!" he yells.

The Neil LaBute play, "The Shape of Things," brings this tension to New Stage Theatre this weekend. Also released as a film with Paul Rudd and Rachel Weisz in 2003, the play brings together four characters who probe deep emotions about art and love and relationships. The result is a disturbing look at the interplay between two young couples, and the darkness that can exist in a relationship where the control dynamics are unequal, and one person will do anything for the other's love and acceptance.

Hannah Bryan and Brent Hearnboth known to date for quirky, comedic rolestake on darker personas as they portray the roles of Adam and Evelyn. Adam is a shy and entirely insecure man who falls in love with the charming and domineering Evelyn. Their relationship explores how far one will go for love and how far one will reach to explore art. Adam becomes a project for the manipulative Evelyn and, during his transformation, learns about the limits of love and the meaning of self-respect while Evelyn explores the seemingly non-existent boundaries of her art.

Along the way, we see their interactions with close friends Jenny and Phillip, an engaged couple portrayed by New Stage newcomer Elyzabeth Simpson and New Stage acting intern David Lind.

Blonde, bubbly Jenny is the typical nice girl who observes Adam's downward spiral along with Phillip, but also finds herself tangled in the destructive web Evelyn weaves. Phillip, who is uncomfortable with the growing conflict, uses humor to lighten the situation rather than confronting it until Adam, as he knows him, disappears. Bryan's excellent Evelyn is the manipulative artist who unapologetically explores her own education through the molding and casting of a new Adam.

"The Shape of Things' is truly all about what we give up to change because it was asked of us and we make that change for love," Director Michael Guidry says after a recent rehearsal. "Everyone has their own arc, their own journey into changing for the better."

The relationship between Adam and Evelyn (or Eve in another familiar story) challenges the audience with deep questions and commentary on how we all approach our romantic relationships, how so many of us seek to change because of a partner's desires.

"You will find that as the audience, you are just an extension of Adam," Guidry says.

The chemistry of this cast is convincing and confronts the audience with an uncomfortable reality, asking the questions: "Have I ever changed myself for someone? In the end, did it matter?" "The Shape of Things" might even spark conversations about the gray areas of what is acceptable in love and if there are solid boundaries for artleaving you wondering about the shape of things.

The production is another in a series of compelling, yet often dark "Unframed" plays that offer an alternative theater experience in a city where lighter theatrical fare tends to pack the house. The series is considered the "second season"meaning shows that are presented within the theater, but not on the main stageand often address provocative topics not available on the main stage at New Stage. Additionally, it offers a lower ticket price that appeals to audiences who cannot afford the expense of a season subscription.

These plays, performed in the Hewes Room at New Stage by a primarily volunteer cast and crew, has recently included: "The Exonerated," a play based on the experiences of six people wrongly accused of murder; "Fuddy Meers," an ensemble drama about an amnesiac's baffling story; as well as David Sedaris' renowned and saucy holiday one-man show, "SantaLand Diaries." The 2009-2010 season kicks off with this weekend run of "The Shape of Things." The "Unframed" series will continue with a production of "Almost, Maine" in January.