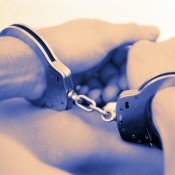 "Since 1986 there's been a very small handful of employers that have been sanctioned for 'knowingly hiring illegal aliens,'" Chandler said. "On the other hand, literally hundreds of thousands of workers have been arrested and put into deportation proceedings. So walking into that picture at Howard Industries, the only Latino that is in the management of the company is the only one that is 'guilty' of hiring undocumented people. What about the Howard family and the rest of the management?"

The U.S. Attorney's office yesterday issued a new indictment (PDF) on Gonzalez, the personnel manager for Laurel-based Howard Industries, which was the subject of the largest immigration-enforcement raid in U.S. history. The previous indictment (PDF), issued May 6, alleged that Gonzalez engaged in a conspiracy to hire undocumented workers with false identification. The revised indictment adds a charge of aggravated identity theft for hiring workers whose identification he knew to be stolen.

Thus far, Gonzalez is the only Howard Industries manager to be indicted for employing undocumented workers. U.S. Immigrations and Customs Enforcement agents took nearly 600 workers into custody after the Aug. 25, 2008, raid of the Howard Industries manufacturing plant and corporate offices. Nine of those arrested pleaded guilty to federal identity fraud charges, and others still await hearings.

"The new indictment concentrates more of the focus on the conspiratorial conduct, which is at the heart of the case, as well as the new allegation involving Gonzalez's participation
in knowingly using the results of identity theft in employing job applicants at Howard Industries, which amounts to aggravated identity theft," U.S. Attorney Stan Harris said in a statement. "The indictment also narrows the employee verification fraud counts to produce a more streamlined set of charges."

Gonzalez faces up to 5 years in prison for each count and a $250,000 fine. Citing Department of Justice policy, U.S. Attorney's Office spokeswoman Sheila Wilbanks said that she could neither confirm nor deny whether federal authorities are still investigating Howard Industries.

I have been so concerned for Mr. Gonzalez. Surely, he couldn't have (alledgely) done all of these supposedly illegal actions in a vacuum. The whole situation is bizarre in a terrible way. Mr. Chandler has made a very valid point.

ALL those that had a hand in hiring the illegal immigrants should be prosecuted to the fullest extent of the law. So much for the lie that illegal immigrants only take jobs that Americans won't. Those 600 manufacturing jobs could have been held by law abiding Mississippians.