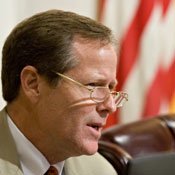 Ward 1 Councilman Jeff Weill was the lone vote against both confirmations Tuesday night.

The Jackson City Council confirmed Police Chief Rebecca Coleman and Fire Chief Raymond McNulty after a brief hearing yesterday. Ward 3 Councilman Kenneth Stokes was not available for the hearing, and could not be reached to explain his absence. The remaining members confirmed both leaders with a 5-to-1 vote.

Ward 1 Councilman Jeff Weill said he was not inclined to vote for the new chiefs because the administration did not make them available to the councilman prior to the confirmation hearing. "I have to say this is the first time I've met you," Weill told McNulty minutes before the vote.

The Ward 1 councilman made his desire to meet with McNulty and Coleman clear to the administration with an Oct. 13 letter. "I believe I will be inclined to support these nominees after a private and thorough discussion of the positions to which they have been nominated," Weill wrote. "Absent such a meeting, I will not be inclined to do so."

Weill explained that Johnson's intermediaries had canceled multiple meetings with the interim chiefs leading up to the Tuesday vote. City spokesman Chris Mims said Mayor Harvey Johnson, Jr. interpreted the language of the letter as a kind of ultimatum.

Weill also expressed frustration at the three-minute time limit on council members' interrogations, but nevertheless offered some of the more thorough inquiries during the course of the hearing. He grilled Coleman on her experience, asking if she felt her management of the 76-member Jackson State University police team was comparable to orchestrating the needs of the Jackson Police Department. He also requested her take on the ratio between sworn and unsworn employees in the police department.

The Ward 1 councilman argued in the weeks leading up to the recent budget vote that the police department contains an unbalanced number of unsworn police officers, and could afford more sworn police officers if it cut back on the number of civilian employees. Johnson argues that the comparatively higher number of civilian workers is necessary because the Jackson Police Department employs civilians for duties normally handled outside the police department in other cities.

Coleman appeared to defend the mayor's side of the argument, although she added that she would be working with her deputy chiefs to cut budget expenses where possible. Weill asked if Coleman was capable of redistributing police department employees to the sworn ranks if it conflicted with the will of the mayor's administration, but Council President Frank Bluntson quickly ended Weill's inquiry, referencing the three-minute time limit.

Ward 2 Councilman Chokwe Lumumba pressed Coleman upon her willingness to tolerate a citizen's review board, which would oversee the work of the police department and conduct investigations into civilian complaints against officers. Coleman showed some motivation to work with a citizen review board, unlike the last chief appointed under Johnson's previous administration. Former Police Chief Robert Moore had dismissed any prospect of a citizens' review board outright. Coleman showed willingness, providing the review board contained a fair number of police officers.

Bluntson cut off continued questions regarding the citizen review board as well as other inquiries from the council pertaining to her treatment of police employees, due to the three-minute time constraint.

McNulty, the city's fire chief during Johnson's previous administration, achieved his confirmation with only some minor grilling from council members. Ward 7 Councilwoman Margaret Barrett-Simon commented that McNulty had proved himself as chief in the past, having conducted an admirable number of firefighter academy graduating classes, and having fulfilled the fire department's secondary duty of keeping city home-insurance policies at reasonable rates by keeping the city's fire safety rating at an optimum level.

At one point, Weill pressed McNulty to clarify some employment gaps on his resume, though Bluntson ended that exchange, again due to time constraints. The council president made clear that he held the confirmation hearings expressly to get the two nominees confirmed.

"The mayor has the right to nominate the folks that he wants in his positions because those people will have to work with him. I try to tell people all the time to give those people the opportunity. That's why I'm ready to vote for this confirmation right now," Bluntson said seconds before Coleman's confirmation vote.

After the confirmation, Coleman said she would lead the department "by example." She added that she would "continue to aggressively recruit new police officers" to fill vacant positions in the department.

I know that some will disagree with me, but I don't see why there should be any problem with the chiefs meeting with Weill, depending very heavily on the meaning of "private." If this means that Weill should have the time to ask whatever questions he likes, so much the better. If it means "off the public record," such a meeting would likely be illegal. Regardless, it seems arbitrary and undemocratic to me that questions should be limited to three minutes. Anyone who has ever been to the council knows that they give over endless hours to discussing all manner of topics. How does the tight limit serve democracy? I am not surprised that Bluntson supports a sort of unitary executive theory of confirmation. How he got elected council president is a mystery to me.

Also, three cheers for Lumumba's effort to create a citizen review board. The Internal Affairs office of the JPD is a black hole. Complaints go in and are never seen or heard from again. There is no real oversight of the police department.

Brian C. Johnson, I understand your point; however, the operative word is "Private." What sounds so disingenuous about Lumumba's efforts is he was setting new rules after the fact. Johnson had already made his appointments and the duty of the Council, under present by laws was to vote the person up or down. There was no provision for a citizen review board. I'm not saying that this is a bad idea. I'm only saying that Johnson should not be held to standards that are not written and approved. It is also interesting that Weill did not ask for a "Private Confirmation Hearing" when McMillin and Dale Danks drafted an aggrement with melton for McMillin to serve as Jackson's Chief. McMillin publicly said that he would not answer to melton. Remember, McMillin was both Sheriff of Hinds County and Chief of Police for the City of Jackson. Think about it. It makes some of us go WTF when the elephant in the room is not seen by those sitting next to him. Maybe Weill's and Lumumba's time will be better spent working on a plan for the Citizens of Jackson to make the Chief of Police's job one to be voted on by the citizenry. That way, each citizen could vote their choice.

First, I think Weill is overdoing the political thing, and it'll backfire on him, covering up his good points. One good point is that the Council should have gotten to meet with the chiefs. And there is nothing wrong with asking for the bond numbers -- but the way he did is going to put the administration on the defensive. If you're not playing politics, you can do it without making not-so-veiled accusations about wrongdoing. Now, if what Weill wants is the old status quo where his ward is always attacking this mayor, then maybe that's why he'd do it that way. But that's so tired, and counter-productive. As for the administration, I am worried that they are coming across too closed. And I am hearing way too much about putting public-records requests it with the City Clerk for public information that ought to be readily available on demand, on a Web site even. We are getting information we've asking for, but I am having to push by the kneejerk response from some of going to the city clerk. City managers need to be empowered to hand over clearly public information without rigamorole. After all, it belongs to the public, and they are all public servants.

And justjess, I want to see Johnson lead the way on more citizen input and sunshine, not hide behind laws that say he doesn't have to do certain things. That's what a truly progressive mayor would do; it's why we endorsed him this time. I really don't want to see status quo -- of political attacks from Republican Jackson and defensive bunker mentality from the Democratic mayor. This is bad for the city.

....but let's have a more logical, rational and reasonable approach to this request of transparancy. The actions by Weill and Lamumba were simple: Lamamba wanted Tyrone Lewis to stay in the position as Chief of Police and Weill has not gotten over Crisler's loss and McMillin's desertion of the job. Lamumba did not hide his feelings and what he would do if he were Mayor. He spoke openly about HIS CHOICE of keeping Lewis as Chief.There are over 100 appointments to be made by the Mayor for City positions. Will there be a public hearing for each of these persons and if the answer is no, the question becomes, "WHY NOT?" Johnson is a guy who plays by the rules and because Weill and Lumumba want to call them as they see fit is unfair and a bog-down for anyone who is trying to do a good job. If the rules, guidelines and laws are ones that you don't like, work toward the changing of the law not against the person who is governing within the peramaters of what has been approved as the standard for operation. Remember that Johnson was accused of not "ringing his own bell" and that many of the citizens did not know all of the things that he was doing to improve the City. He took a beaten from the Clarion Ledger and many citizens in influential positions. A burned child, dreads the FIRE. I'm sure that Johnson is doing those things that are legal and necessary to avoid being smothered (X2)by the smoke.