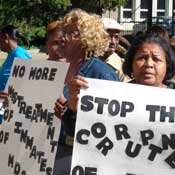 Members of the Southeastern Christian Association, Operation Help Civil Rights Group, and Mothers of Inmates protested outside Mississippi Department of Corrections headquarters on President Street in Jackson today, lobbying for fair treatment of sons and husbands who are inmates in MDOC correctional facilities.

"A lot of inmates are being mistreated and their civil rights are being violated at Parchman," said Wyndol Lee, president of Operation Help Civil Rights Group. "They're going to bed hungry. A lot of inmates are complaining that they're being raped by other inmates, or beaten by security workers even though they're not violating any rules. They've come to us for help, and we're going to make their problems known."

Protesters stood before the MDOC building, shouting for Commissioner Christopher Epps to come down and face questions about inmate mistreatment at the facilities. Gillam claimed Epps told him he would come down and speak, though Epps did not appear this morning. In response to Jackson Free Press inquiries, Epps' office sent a statement via e-mail claiming he had earlier attempted to make contact with protest organizers.

"Since I heard (Gillam) would return to Jackson, I have made contact with Dr. Gillam on several occasions.Â At no time during these contacts did he request an appointment with me.Â It is regrettable that the complaints of these citizens are not being brought to the agency in a productive manner that allows specific complaints to be addressed," Epps wrote. "I have never refused to meet with anyone and am always ready to address concerns of inmate family members in a productive manner."

Epps added that he looked forward to "meeting with Dr. Gillam again," and was "hopeful" that Gillam would provide more specific accounts of abuse at MDOC facilities.

Mothers of Inmates President Jean Smith said she had plenty of specifics to offer Epps. "I have mothers with children who are being harassed not just by the gang activity, but by correction officers who are not processed correctly by human resources there, and who treat inmates brutally," said Smith, a West Point, Miss., resident, whose son John Anderson is incarcerated at Parchman. "When their time is almost up, the officers provoke them into bad behavior to make them serve more time. We're not paying our taxes to pay a correctional officer to harass, provoke and beat our children. Someone in this state government will be held liable for our children if nothing is done."

"Epps and Haley Barbour both know this," Smith added. "We've been here in the past, and we're not going away."

Other mothers claim their children are begging them to ask facility authorities to keep them in solitary confinement to protect them from more violent fellow inmates.

Lisa Williams complains that her son, Sam McCarter, is told to work in the fields at Parchman: "They're making him pull hay all day and putting him to bed hungry. If he doesn't want to work in a field all day he shouldn't have to," Williams said. "The days of slavery are supposed to be over."

Other protesters had more personal complaints. Sardis resident Cordelia Ward said handlers moved her brother Ricky Ward from Parchman to a holding facility in Rankin County with no initial explanation or warning of the transfer. She also complains that guards at Parchman shamed her with repeated invasive searches when she came to visit.

"They made me pull off all my clothes and went inside of my vagina looking for things. They made some women take off their wigs, and it's really embarrassing for older women visiting their relatives and grandchildren," Ward said.

Gillam said he had compiled a list of officers accused of beating one inmate, and would be taking the list to the FBI in hopes of sparking an investigation into allegations of abuse in MDOC facilities. "We have the names of specific officers who have been beating inmates. Three weeks ago they beat an inmate until he was so wobbly he couldn't stand up, and we're taking this information to the federal government because they're treating people worse than animals here in this state," Gillam said.

In his statement, Epps said "no allegation of mistreatment I receive goes idle.Â Each and every one is looked into, and action is taken if any level of our inmate care is falling below standards."

Epps insisted Gillam speak with him personally regarding the beating allegations, adding: "To do otherwise would be uncooperative and counterproductive."

Gillam said protesters would hold their next rally in January.

I totally agree!! Corruption must be addressed, quit burying your head in the sand. Its not only at Parchman but every facility has issues. YES our guys can appeal RVRs but do they ever win an appeal??? Not that i have seen. HOW can they when the same person that issues the RVR also gets to be judge and jury at the appeal and does not let the inmate even read the report.. YES i have insider info. I DO HAVE a loved one under lock and key, I pay my taxes and expect them to be humanely treated. I am not saying he was not guilty but I would like to see him walk free one day SANE!!! I would love my tax dollars to pay for FOR THE CLASSES that Epps says is avaialable (taught by qualified people not other inmates. STANDING around clapping your hands is not conducive to anything but clapping your hands. MOST of these guys will walk free one day, it behooves MDOC to help them to move forward. AFTER ALL IT IS DEPT OF CORRECTIONS!!! CORRECTIONS PEOPLE!!!!

It is long overdue that abuses within MDOC be brought into the public domain. Many inmates are indigent, have little family support, and are fearful of having their voices heard due to reprisals by staff. I'm heartened that these issues are being brought forward to be addressed by officials. It is long, long overdue. In a society like the United States, it is unconscienable that those incarcerated are abused, hungry, and in physical jeopardy from both other prisoners and guards. We should be ashamed to be in the company of countries like China and North Korea.