The 2009 JFP Interview With Robert Amos 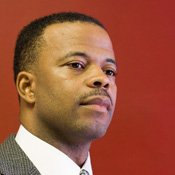 Robert Amos is the youngest remaining candidate for mayor. At 35, he's already worked in more fields than some do in a lifetime—health care, education, criminal justice and business—and he's currently an adjunct professor at Jackson State University's College of Lifelong Learning. Amos, who is running as an Independent, has worked as a school attendance officer, a student finance officer at a vocational college, and the owner of a carpeting and flooring business. He also owns and operates L & R Enterprises, an investigation firm specializing in background checks for hiring purposes.

Drawing on his varied experience, Amos speaks about the city's ills with an authority that belies his age.

• You're putting a lot of emphasis on young people in your platform. What ideas do you have for addressing the problems that young people face in Jackson?
Our primary problem is not finances. We need to be able to manage our students in the classroom, number one. And then in return, we won't have so many being suspended. And number two, we have to curb the dropout rate. Jackson Public Schools is doing a marvelous job of educating those who are in the classroom, but if they're not in the classroom, they're falling short of a quality education.

• What kind of measures would you propose to address crime?
A lot of candidates talk about beefing up the police force, but you have to increase morale. All it takes is you to patrol your beat; a police officer to patrol his or her beat vigorously. Speaking with a lot of patrol officers, they feel that morale is down.

• How do you improve officer morale to get them doing their beats?
A lot of their primary concern has nothing to do with patrolling their beats. A lot of them take the job, they feel, because there aren't any other opportunities in the city. They need to know that you have an opportunity to take the sergeant's exam so that you can advance your career in law enforcement. If you know you have a chance to become a sergeant or a detective, they'll go out there and bust their tails off and do a good job.

• Are we talking about pay raises, too?
The city of Jackson has made some drastic cuts. Now, they should have started last year. I see making cuts to wasteful spending and prioritizing your money whereas we can create a surplus over the next year or year and a half.

If I say I want to give employees pay raises, it needs to be residual. You don't need to be saying, "We'll give raises," and then not have the money anymore. It's easy in politics to say: "I'm going to give police a raise. I'm going to give employees raises." But how are you going to do that? You're not getting any additional monies to create a surplus. That's making cuts, and I'm not talking job cuts.

• How can the city go about getting more money? How does the city grow economically?
Right now, those are the measures that I personally feel we're going to have to take. The recession is scheduled to be here 'til about 2011. So can the city grow? If we can make the city more attractive, retain the citizens that are here, retain the businesses that are here and continue to provide them with tax abatements. You have college graduates and people that are married and have families—if we can get those kinds of families to feel safe in Jackson, we can increase our tax base.

• What will bring residents or businesses?
Safety. Create an environment that's perceived to be safe. Create an environment that all people are in and are getting along, that's of all nationalities, of all races. What has bothered me about our city is that we live together, we work together, a lot of our kids go together, but with this campaign, it shows that this city is still racially divided. And if we continue to be racially divided, we're not ever going to grow. And with the run-off election, it has let me know that this city—we're still divided.

• And what can a mayor do to address that?
We have to create some dialogue between the individuals that matter. I think it's a lack of understanding. Just because you're a Caucasian mayor or an African American mayor, that doesn't mean your entire staff needs to be majority African American or Caucasian. Diversify your staff, and that will create trust. With policy alone, you can't force people to change their ways, but policy decisions can kind of help bring that trust factor back.

• How can the mayor's office make the operations of city government more transparent?
I don't know why it would take someone seven days to release something to the press. I've said before, I think 48 hours should be the max. Anything that can be legally released to the press should be done no later than 48 hours. The city Web site needs to be constantly up-to-date. Claims dockets and things of that nature—the very next week after the City Council meeting, those things should be immediately accessible to the public.

• You'd make the media happy with that.
I'm always willing to say, if you're doing things in the best interest of the city, you shouldn't have anything to hide.

• Can you think of any other cost-cutting measures you'd look for in city government?
I don't want to commit political suicide by saying this, but I just have to be honest: I think it may be time that the city looks at restructuring salaries of the people on the high end. There are a lot of high-paying jobs in city government. But if you continue to lose citizens, how can you continue to pay these high salaries? It just doesn't make sense.

• What other issues would be important to you as mayor?
We still don't have change. Look at the City Council. If young individuals in Jackson continue to see that Jacksonians are willing to keep the same politicians in place with the same ideas for two decades or more—if we're willing to do that, we're not ever going to grow as a city, because young, bright-minded, talented individuals are going to continue to leave here. We have some intelligent people who just can't get jobs because they have some aunts and uncles who won't let go.

• What's taken place in the last four years?
There's a young culture in this city that's out of control. There are a lot of people who don't know what to do. They don't have answers. If I had a number one issue with everything about this city, it's this young culture that has turned down the wrong path.

• What's the role of government in dealing with that culture, though? Do you support things like a saggy-pants ordinance?
No, I don't support that. The problem is not a law or ordinance to say you can't sag your pants. It's the mindset. This kid shouldn't feel that he has to sag his pants. By trying to force a child to do this, it's not going to work. I was always against that. I'm just a strong believer in changing that kid's mindset rather than telling him he can't sag his pants. Change his mindset.