Recio To Stand Trial Next Week 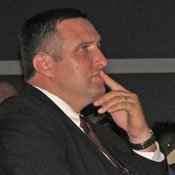 The civil rights trial of Jackson police officer Michael Recio will proceed next week, despite requests by federal prosecutors for a postponement after the death of Mayor Frank Melton. Prosecutors will formally drop their charges against Melton later this week.

Recio stands accused of depriving constitutional rights and conspiring against rights for his role in the 2006 destruction of a Ridgeway Street duplex. He and Melton beat state charges for the incident in 2007, and an earlier federal trial for the two ended in a hung jury on Feb. 24.

At a telephone hearing this morning, prosecutors asked Judge Dan Jordan to delay Recio's trial because of the "enormous outpouring in the community" following Melton's death on Thursday, May 7.

"The government's position is that the feeling is just too raw" to select an unbiased jury, prosecutor Mark Blumberg said.

Blumberg noted that media coverage of Melton's death often mentioned Melton and Recio's pending federal trial. Even previously unbiased jurors could have read or heard about the trial in the week since Melton's death.

"The enormous news coverage that surrounds Mr. Melton himself is undoubtedly going to spill into this trial," Blumberg said.

"This has been pending for a long time and has been hanging over my client's head," Stewart said.

The protracted prosecution has taken a financial toll on Recio, Stewart said, adding that Recio has lost his house. In her April 30 request to be appointed Recio's public defender, which the court granted, Stewart said that Recio's house was in danger of foreclosure.

Jordan denied the government's request for a delay. The court had already incurred "significant expenses" by distributing a questionnaire to roughly 700 potential jurors, he said.

Jury selection will begin Monday, when attorneys will have the opportunity to question a pool of 100 respondents on their preexisting biases about the case.

What a total waste of time and money but that's the one thing at which government excels.

Why is Justice a total waste of time and money? It kills me how these same people who say let Frank go are the same people standing up for Ms irby. Not saying you are jennifer but why do the wealthy among us get special treatment? Recio did the crime its sad that his boss ie gone but JUSTICE STILL ROLLS ON.

Justice is never, ever, a waste of time and money. Justice, however, is not what will be achieved here. The timing is not right, and sadly, it will end up being an exercise in futility. And that is what is a waste of time.

Well Chaffeur Who gets to say what is the right time to deliver Justice. Recio is guilty regardless if his co defendant passed last week. Justice must roll on.

Justice must roll on. I agree. There is some sentiment for the goverment to move on because of Melton's death. However, you cannot stop pursuing just because of that. Heck, there were people who didn't want justice to be pursued when Melton was alive.