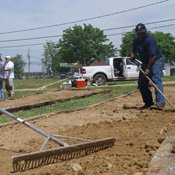 Volunteers transformed a grassy lot behind the Jackson Medical Mall into a community garden last month.

On Saturday, April 25, volunteers swarmed over the one-fourth acre lot behind the Jackson Medical Mall. They worked all morning to transform a grassy patch of land into a public garden to be operated by the Jackson Inner-City Gardeners, a new non-profit organization. The air was alive with noise as the volunteers constructed three raised garden beds about 8 feet wide and 30 feet long, to be planted with organic fruits and vegetables including melons and squash. Nearby, green beans and corn were already sprouting from a previous workday.

The bustling scene in the community garden was like an illustration from a children's story about the importance of working together. More than 60 people from all over the Jackson area, of various ages and backgrounds, had volunteered to achieve a common goal: building an organic garden in a West Jackson neighborhood lacking convenient access to fresh produce.

The garden drew volunteers of all ages and backgrounds. People such as three-year-old Claire Roberts, mayoral candidate Harvey Johnson, and 74-year-old Elijah Jones worked side-by-side to shovel soil into wheelbarrows. Others built the garden beds out of old railroad ties and hand-tilled the ground underneath.

"This is a garden for everyone," said Benjamin Crosby, one of the event organizers.

Detrater "Tre'" Roberts, JIG's founder, directed the volunteer work in the garden. He sat down on the tailgate of his truck to take a break and observe the way one garden can bring a whole community together.

The Unlikely Gardener
Chances are that when you picture a typical organic gardener, an image of Tre' Roberts doesn't pop into your mind.

Roberts is a large African American man who prefers nylon warm-up pants to overalls. He isn't a gardener by trade—he does full-time computer support—but he grew up on a farm in Canton and is eager to share his knowledge with others.

Roberts sees the garden as a multi-purpose teaching tool. He welcomes any schools to bring students to the garden to interest them in science and agriculture. In the future, JIG will pay youth to work in the garden and offer workshops on work readiness and entrepreneurship.

"We want to push them, make sure they're doing good in school and well with the parents, so we can make good citizens out of them," said Roberts. He hopes to eventually award college scholarships.

Dr. Aaron Shirley, one of the founders of the Jackson Medical Mall Foundation and chairman of the board, heard that Roberts was interested in starting a family garden and suggested developing a community garden instead. Roberts agreed, and JIG was born. Its mission is to promote healthy lifestyles, people and communities. Its garden is the first inner-city community garden in Jackson, open to the public like the Rainbow Grocery-Tougaloo College garden.

JIG plans to open a farmer's market in July that will sell the garden's organic produce to the neighborhood at affordable prices. All proceeds go toward expanding JIG's garden and its programs.

‘Responsible For Your Seed'
The volunteer day in the garden, part of a nationwide Day of Service, drew not only dozens of volunteers to the JIG garden, including Roberts' wife and four children, but also curious members of the neighborhood.

A retired woman who had lived a few blocks away for 16 years stopped to inquire about what had brought so many people to her area. She declined to give her name, but said that she was thrilled to hear that fresh produce would soon be within walking distance. Since the New Deal Supermarket in the Medical Mall closed about three years ago, she had to drive an inconvenient distance to buy fruits and vegetables. She told Roberts that she would spread the word to her neighbors.

Roberts enjoys teaching Jacksonians about the unexpected benefits of gardening. For example, he's lost 75 pounds in the three months that he's been active in the JIG garden, and he hopes to slim down even more.

Gardening also teaches important life lessons, Roberts said. In particular, he uses gardening as a metaphor to teach young men "how to be responsible for your seed."

"How you take care of your garden determines how its produce turns out," Roberts said. In the same way, he said, a nurturing environment contributes to healthy children.

Overall, Roberts wants the JIG garden to teach people the importance of investing in their communities. "Life is about serving others, not serving yourself," he said.

Tre' Roberts invites all community members to get involved with JIG by volunteering in the garden, teaching workshops or donating tax-deductible funds or materials. Call 601-924-3539 or e-mail [e-mail missing] for more info.