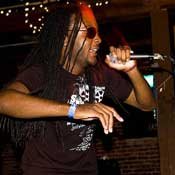 I love hip-hop, I really do. I can remember riding around Jackson with my best friend in the "Knight Rider"—a 2004 Ford Taurus—freestyling, terribly of course, off sick instrumental tracks into the wee hours of the night. Hip-hop became a connector—of people, emotions and other music. "I Love Hip-Hop" will surely showcase Jackson's best hip-hop artists, and they all have a soulful heart for the genre. And they've got serious talent, too. That's difficult to say about an entire group, but it's true. The night will feature some of the freshest, most thought-provoking artists including 5th Child, Skipp Coon, 7even:Thirty, Pyinfamous and the Jackson Free Press' own Kamikaze. Don't miss this. Call 601-317-5444.

Fantastic Show! and thanks to those that came out. It was a GREAT turnout and even better when it came to those performances. Feedback is welcomed if you were there!