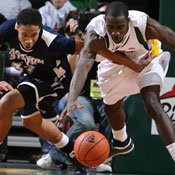 JSU player Grant Maxey (left) hopes to have a better season this year.

Conference play is what it's all about in college basketball. Those games will start next week.

Winning conference games is about players. Mississippi State has one of the nation's best defensive players, but the Bulldogs' most intriguing player is ineligible. Ole Miss has its best players healthy, which wasn't the case at this time last year. Jackson State has lost its best player for the season. And Southern Miss has talented guys, but the Golden Eagles are a tough team to figure out.

The most talked-about player at Mississippi State can't play. Those who have seen him practice say freshman Renardo Sidney is already the best offensive player at Mississippi State. But he can't play because the NCAA has questions about his amateur status. It's funny how the NCAA didn't investigate the amateur status of players like Reggie Bush, O.J. Mayo or Chris Rose. Just saying.

The guys who are playing aren't too shabby. Jarvis Varnado is already the NCAA career leader in blocked shots. He has 62 blocks a game and is averaging 13.7 points and 10.2 blocks a game. Ravern Johnson leads the Bulldogs with 14.9 points per game, but this team seems to have a new high scorer every night.

The Bulldogs were ranked in almost everybody's preseason poll and picked to win the SEC West. But State stumbled out of the starting gate, losing their opener. But since a loss to Richmond, the Bulldogs (10-2) have won seven in a row.

"We're nowhere near as good as we need to be, but I like our progress," coach Rick Stansbury told The Associated Press.

Outlook: The Bulldogs should contend for the SEC West title. Their present roster is good enough to reach the NCAA Sweet 16. If Sidney becomes eligible and blends in with his teammates, this could be a Final Four club.

Jackson State was picked to win the SWACagain. But the SWAC is all about the conference tournament and the automatic NCAA berth that goes to the winner. And the Tigers fell short in the tournament in 2009again.

An ankle sprain has sidelined Rod Melvin, last season's SWAC freshman of the year, but he's expected to be ready for conference play.

The Tigers were 1-10 going into Monday. They have spent the first weeks of the season on their annual round of money games, most of them on the road. These games help JSU's bank account but they can play hell with the team's record.

When the Tigers were 0-6, coach Tevester Anderson said effort was the most important thing. "It doesn't matter who you're playing. If you go out and compete, you put yourself in position to have success," Anderson told The Clarion-Ledger. "If you don't compete, you're doomed."

With the big names out, Tyrone Hanson (12.4 ppg) and Garrison Johnson (12.3 ppg) have had to shoulder a bigger burden.

Outlook: The Tigers defeated Eastern Washington 72-67 last week in Las Vegas for JSU's first victory of the season. The Tigers have to hope that what happened in Vegas won't stay in Vegas. But with Maxey out and Melvin hurting, it's unlikely JSU will be a SWAC contender again.

What a difference a year makes. Last year at this time, the Rebels were coming off a disastrous trip to Cincinnati that resulted in season-ending injuries and arrests. This year, Ole Miss was picked to finish second in the SEC West. The Rebels are 10-2 entering this week and ranked in The Associated Press poll.

Chris Warren was the main casualty of the game in Cincy, going down with a knee injury. In his absence, Terrico White emerged as a star and won SEC freshman of the year honors.

There were some concerns about whether Warren and White would be able to co-exist. So far, so good as Warren, averaging 17.6 points per game, has become an even better scorer.

"(Warren) never has a bad day," coach Andy Kennedy told ESPN.com. "He attacked his rehab like I've never seen anyone do before. Now he doesn't wear a sleeve or a brace or anything on his knee."

As for White, "that was the silver lining if you are looking for the positive in what we went through last year," Kennedy said at SEC Media Days. "We asked him to transform into a point guard and lead his SEC team and he took on the challenge."

Outlook: The Rebels, if they stay healthy of course, will contend for the SEC West title. Winning in Oxford will be a lot tougher this season.

If Jeremy Wise hadn't left early to play pro basketball, Southern Miss would have been a top-three choice in the preseason C-USA rankings. Without Wise, the Golden Eagles are predicted to finish ninth.

The Eagles have gotten off to an 8-3 start (5-3 against NCAA I-A teams). The Eagles played one of their best games in an 81-79 loss at Ole Miss. Then the Eagles lost their last two games before the Christmas break.

"In both losses, we shot poorly early," USM coach Larry Eustachy told the Hattiesburg American. "I'm disappointed, but not discouraged. We've got to bottom out sometime. This is all about getting into league play and trying beat great teams in our league."

Outlook: The Eagles' schedule is again overloaded with NAIA teams. That helps the win-loss record, but makes it tough to figure out how USM will fare against NCAA teams. USM started well last season, too, but injuries proved costly. This season's Eagles are talented, but they don't have enough firepower to contend for the C-USA crown.