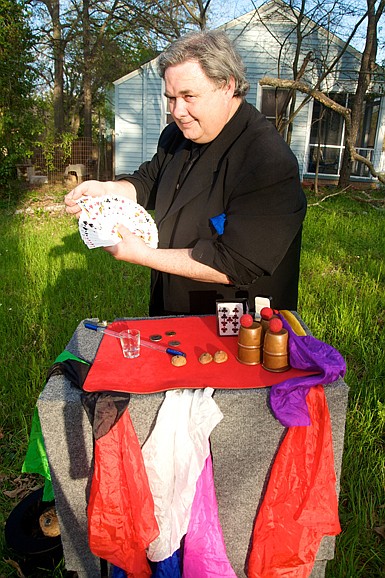 After shuffling the deck of Bicycle playing cards multiple times, magician Robert Day was prepared to choose my card. Judging by the complexity of this "illusion," I was sure he would fail.

"Three of hearts," he announced proudly. He had done it again.

The 50-year-old Byram native first delved into magic the age 11. While he was practicing one of only two tricks he knew, a woman witnessed his feat and asked if he would perform at a birthday party.

After performing at the party, he received more job offers. Even while still attending Forest Hill High School, Day entertained at birthday parties and special events. Then, when he was 15, Day earned something very special: a driver's license.

"I would sneak down to New Orleans to perform street magic and watch others perform. No matter who you see on TV, the best street magicians in the world are in New Orleans," Day says.

After completing one year at Mississippi State University in 1978, Day performed a "disappearing student" trick and moved to Massachusetts.

"My act was taking off, and I was ready to tour," he says. For the next several years, Day hit every corner of the continental United States before finally settling back in Mississippi. In 1980, Day signed on with The Comedy Workshop in Houston, Texas, and began to commute monthly from his home in Pearl. While with the club, Day opened for a then little-known comedian named Sam Kinison.

In 1999, a venue approached Day with the opportunity of a lifetime: to headline at the Circus Circus Casino in Las Vegas. Day decided, however, that the glitz and glamour of Sin City would not be a wholesome place to raise his two daughters, Holly, 18, and April, 12. Instead, Day took off to the family-friendly destination of Branson, Mo. While there, Day was the featured performer at the Branson USA theater.

"On opening night, when I walked out in front of a packed audience, that is when I knew I had made it," he says.

Since then, Day has moved back to Byram but continues to tour around the South, entertaining audiences young and old. When not pulling rabbits out of his hat, Day is feeding them. He calls himself a "huge" animal lover and says he never endangers the animals he works with on stage.

Day says he will probably retire in the near future and hopes up-and-coming Mississippi-based magicians will emerge in his absence. When asked what he'll do once he retires from magic, he replies: "I might get a job."