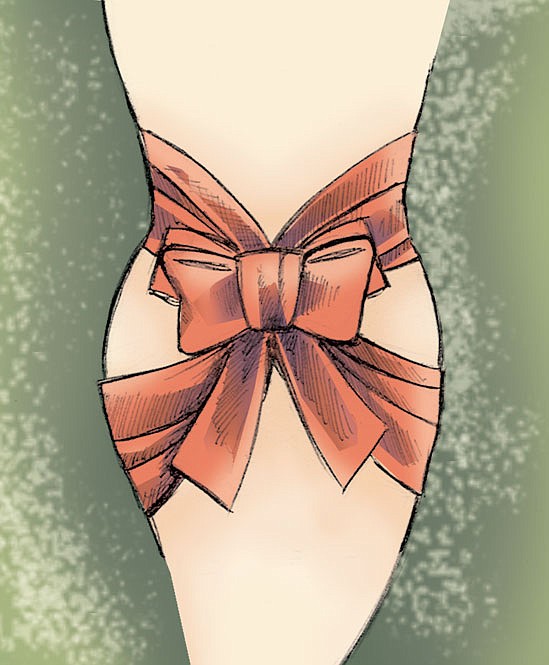 Food is the enemy to many Americans. With the rising number of diabetes, heart disease and obesity cases, we see our very sustenance as cause for medical alarm. We rarely indulgeat least not without a hefty dose of guilt attached to the waistline. We don't savor small bites or celebrate the staggering variety of cuisines our rich immigrant culture has gifted us. As you can imagine, the holiday seasonwith its stuffed turkeys and tables loaded with round juicy hams and jewel-like cookiesis enough to make any dieting American scream in deprived agony.

But it doesn't have to be this way. If you change your notion about food, we just might be able to take pleasure in eating. You can enjoy the season and its culinary offerings; just do it in moderation. Approach your relationship with food more intimately. Treat it delicately, and in turn, it will respond to your body more kindly.

Ditch Extremes, Adopt Balance
Our culture doesn't often prize a graceful balancing act. All those holiday foods wouldn't induce dietary stress if you learned how to adopt balance and moderation. Americans like to eat big and take food to extremes. But eating enough food for two at dinner won't leave you much room for dessert, will it? And similarly, starving yourself all day in anticipation of the evening's feast will only spawn a ravenous appetite you'll find hard to control later.

Think of your food in smaller, less frantic terms. Imagine all the delectable cuisine you'd be able to enjoy if you just ate less. Try adopting a "small plates" food philosophy, whereby you only take a small spoon sized "taste" of each dish that strikes your fancy. Instead of shoveling mounds and gulping drinks, mindfully savor each bite and let every one of its myriad flavors mingle on your tongue. Doing so will not only allow your body to register when it truly is full, but you'll find yourself actually appreciating the craft and artistry that went into preparing the food.

Let's Make a Deal
Food swapping is a great way to manage portion control. Suppose you're nervously headed off to a holiday cocktail party where you know there will be treats of every imaginable kind calling your name. If dessert's your thing, make a deal with yourself to eat only small portions of the most healthful items on the menu (e.g. crudités minus the fatty dips, nuts, fresh fruit and lean protein), then enjoy that slice of chocolate torte or pecan pie without an ounce of remorse! Maybe sweets aren't as important to you. Then mindfully forgo the dessert buffet in lieu of whatever savory dishes you've been ogling. Having created such a rational selection strategy will enable you to be in control and not feel as though you've been cheated.

Intentional Imbibing
Just as with food, Americans tend to overdo it when it comes to alcohol consumption, especially when the host breaks out a string of festive holiday libations. Alcohol not only carries its own host of health-related issues, but can also wreak havoc on your healthful diet. Excessive alcohol ingestion leads to lack of inhibition, which generally leads to overindulging in food. And not just ordinary fare, but all of the overly salty and sweet stuff you've worked so hard to avoid.

Also, many holiday drinks such as eggnog, rum chocolate and spiked ciders are really just desserts disguised in a mug. If you want to enjoy a cup of hot chocolate, go ahead; just make sure to swap it out for dessert. Sip it slowly and take a smaller cup size than the average 16- to 20-ounce American standard.

Perhaps wine, beer or traditional spirits are more your taste? There's nothing wrong with consuming these at a holiday dinner or party. In fact, wine and beer have both come up repeatedly over the years in reports detailing their healthful attributes. They lose their antioxidant-rich edge if you consume too much, however. Light drinking is the only way to go. This means one to two drinks per day for men and one per day for women.

Alcohol isn't the only substance to watch; sugar-laden soft drinks and mixers should also be on your radar as they normally contain high amounts of refined sugars. Think diet drinks are the way to go? Think again. These contain harmful chemical substitutes such as aspartame and phenylalanine. Drinking a glass of good ole water before and during a meal will help you avoid overeating, and it also reduces the amount of alcoholic drinks you reach for absentmindedly.

All Glasses Are Not Created Equal
Americans like drinks BIG! But venti lattes and margaritas that resemble fish bowls are obviously not better for your health. Take a cue from your mother's cocktail party and reduce that mondo 8- to 12-ounce wine glass to the traditional 4- to 6-ounce size. Stick to a 12 oz. beer, 4 oz. of wine, 1.5 ounce of 80-proof spirits or 1 oz. 100-proof spirits.

Get Active
Instead of slugging out on the sofa after dinner, get your bum up and get active! Gather friends and family for a game of touch football on the lawn, a walk around the neighborhood, or even a bout of Twister or Wii tennis. If you're really revved up, resolve to make it a holiday tradition to go on a run or run/walk before the big meal.

Whole Foods = More Filling
As with any day of the year, avoid overly processed junk foods that are laden with transfats and high-fructose corn syrup. Consume as many "whole foods" as possible (those that are minimally processed, if at all), and you'll not only feel more full, but you'll also have more energy to sustain you through all the late-night revelries.