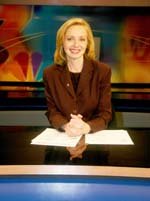 Cheryl Lasseter, the weekend morning anchor at WLBT-TV3, was Cheryl Frazel when she arrived in Jackson, a Baltimore native who grew up in a suburb. While earning her communication degree at Towson University in 1992, she deejayed at the college radio station. "I always had TV in the back of my mind, but I never thought I could do that; that was for really, really talented people," Lasseter said as we talked in the children's book section of Lemuria, while her 18-month-old son Sean played nearby.

Her first job in television, writing for the Web site of a Baltimore station, convinced Lasseter that she was in the right career field, but she wanted to be on the air. Six months later she was reporting for WMDT, the ABC affiliate in Salisbury, Md. "It came as a total shock how I had to shoot my own video and edit it," Lasseter explained, smiling at the memory. Those skills, she realized quickly, were priceless and led to a better appreciation of the job others do at the station. She still edits some of the stories she covers for Channel 3.

I met Lasseter, now 34, when she volunteered for the 2001 Crossroads Film Festival. She told me that volunteering would be a great way to really get to know Jackson and its people.

That curiosity and can-do attitude led her to Jackson by way of Lexington, Ky., where she was education reporter. "I absolutely loved that job," she said, "but when I was asked to fill in for the anchor, I knew I wanted to do a morning show." She's had that same shift since she arrived here in October 2000. Lasseter likes the camaraderie at WLBT, although when she first started as anchor for the 6 a.m. shows, "it wore me out. I get up at 4 a.m. and am at the office by 5:15 a.m., reading scripts until 5:45 a.m. Then I put on my own make-up and go on the air." During the week, Lasseter covers stories as assigned, often on education. "I never want to stop reporting because it keeps you fresh, on your toes, so you don't get lazy."

On a live shot in May 2001 at the Ag Museum's Hog Wild barbecue competition she met Michael Lasseter, who was setting up the stage. Interest-at-first-sight turned to love, and the couple married soon after. "Being a wife and a mother as well as a professional woman makes life have a routine that I enjoy," Lasseter said. She picked up Sean and hugged him close. "I absolutely love being a mom. I'm a real adult."